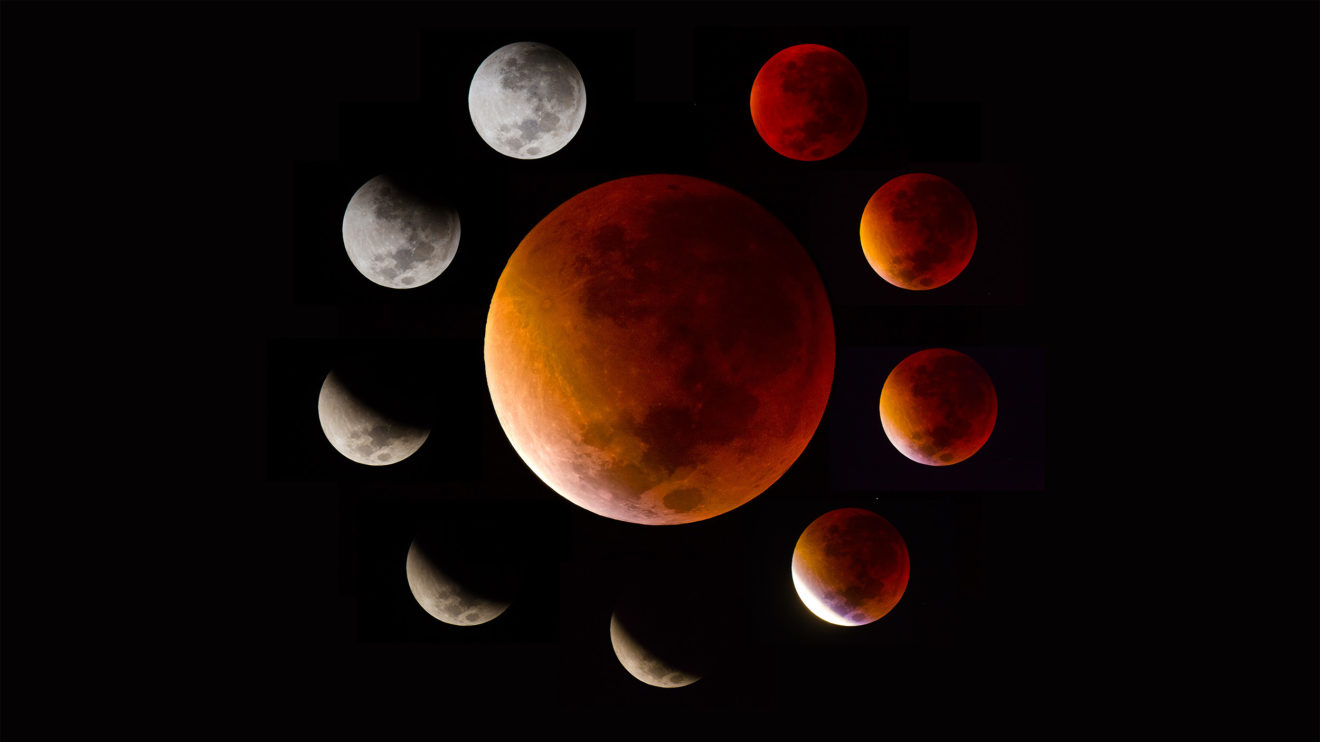 Shooting a “blood moon” total eclipse is not the same as a standard moon photo.

Don’t worry, shooting a total lunar eclipse is easy. But, you have to do it right, and knowing a few things before you start can really help. I’ve compiled a few of the sticking points that can trip you up during the process. Hopefully my past mistakes won’t be yours! Let’s get to it.

1. Use fast optics with a low possible focal ratio

This doesn’t make sense for the moon, but it does this time. Normally we don’t talk about using a fast lens for shooting the moon. But, this isn’t your normal moon imaging session! When the moon is fully eclipsed and hiding in the shadow of the earth, it will be very dim.

At the beginning of the eclipse (the penumbral phase), you will be shooting the moon like normal, at fractions/hundredths of a second. By the time the moon is fully cloaked in the earth’s shadow (the umbral phase), your exposures will be measured in seconds, even with higher ISO usage. So, in order to keep your images as noise-free as possible using a lower ISO, faster optics with a wider aperture will help!

2. Use a tracking mount for longer focal lengths

If you want to focus on up-close features of the moon, filling the frame and using a very narrow field of view, you will need a tracking mount once the “blood moon” effect takes over to avoid motion blur.

Why? At the totally eclipsed point, exposure length required to capture the “blood moon” will be in numbers of seconds (even with a higher ISO) instead of fractions of seconds used to capture a moon photo.

What’s a longer focal length? Anything past 100mm or longer or so is going to suffer motion blur on a static tripod in order to properly expose during the “blood moon” totality stages, unless you’re using a VERY high ISO speed and short, noisy, exposures.

3. The camera settings you should use for a total lunar eclipse

I’d love to be able to simply say “Use this exposure, aperture, and ISO,” like we do in our DSLR astrophotography cheat sheet, but I can’t really do that because as the eclipse moves through its phases, everything changes, constantly. It’s also very equipment dependent. Are you using telescope? A fast wide lens? A fast mirror telescope with a large aperture, or a small aperture refractor?

However, what I can tell you, is that you should test your setup BEFORE the eclipse starts, knowing it will change considerably over a matter of hours. As a starting point, when the moon is full, test your camera at an exposure time of around 1/400s, ISO 100, and a stop or two from wide open aperture and play around with the exposure time until you’ve got a good starting point, be sure not to overexpose! Don’t adjust too often after that.

Once you’ve got your starting point sorted out, adjust exposure time longer as needed (watch your histogram!) as the penumbral eclipse starts and moves towards umbral and totality. When the exposure time reaches into the seconds (1 or 2 seconds or so), start adjusting the ISO higher, and then play with shutter speed again.

After the umbral phase completes and the moon starts to move out of the earth’s shadow, it will get slowly brighter at the same rate that it dimmed towards totality, just in reverse order. The same rules apply, just in reverse: Start by shortening exposure time, then lowering the ISO, doubling the exposure time, and repeating until you get back to your starting point at the end of the eclipse and normal life resumes.

The EXACT camera settings and setup used during the 2018 July total lunar eclipse, start to finish

Everybody’s always asking “what settings did you use?”…and here’s the answer. It’s almost always the same, except when it’s not. And, for the record, camera settings are only about 10% of the equation, so let this sentence be my tiny effort to help dispel that myth.

So, head on over to my article that details approximately 85 (EIGHTY FIVE!) different camera settings I used to successfully capture the July 2018 total lunar eclipse.

The sequence is LONG, start to finish is a number of hours, be prepared!

Things to think about:

As with all things astrophotography, the best thing you can do is get out there, practice, and use your gear. Knowing your camera and lenses is half the battle. Enjoy the view!