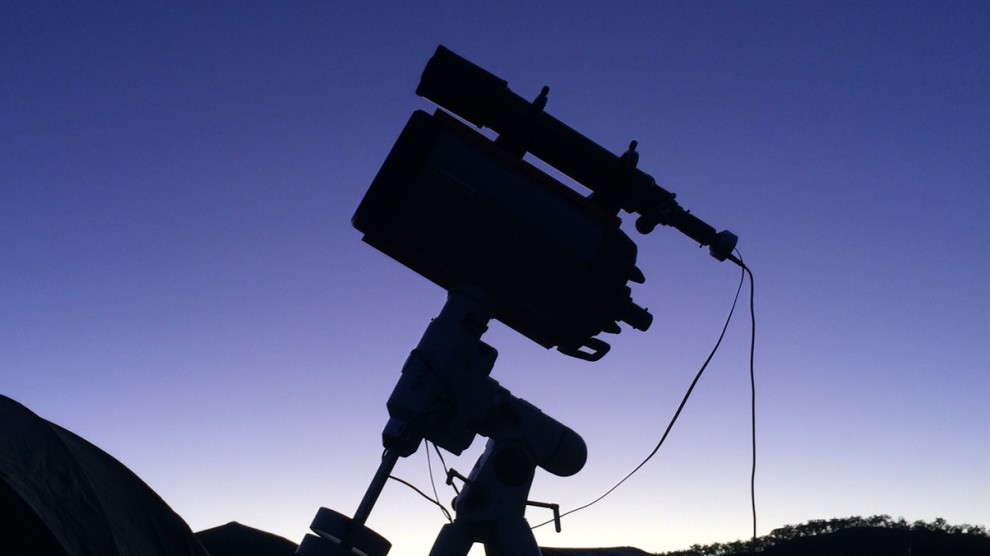 By far the most frequently asked question I hear from beginners is “How the hell do I polar align my telescope?”.  Even at star parties, experienced users can be thrown off by a new location and suddenly need to relearn the art of accurate polar alignment.

Because I’m Australian, the methods described here are particularly sympathetic to those of us who can’t see, or don’t have a pole star like Polaris. We do, however, have everything else worth looking at in the night sky! (Feel the burn, northern hemisphere!)

You will need the following things: 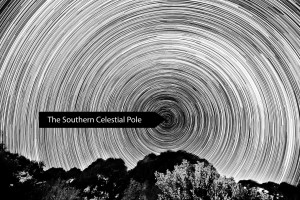 What is the “celestial pole”?

It is the point in the sky that all the stars appear to be rotating around in a long exposure. It’s due south in the southern hemisphere, and north in the north, but its height in the sky varies depending on your latitude.

What is polar alignment?

Ultimately, all polar alignment really boils down to is that when your scope is in the parked / home position, it should be pointing exactly at the celestial pole. Easy right? Not really. The celestial pole is a very exact and virtually invisible point in space. We want to adjust the mount with precision until you are so well aimed at the pole that while tracking the apparent movement of the sky, only one axis of your mount (right ascension) is moving (in theory).

Once polar aligned accurately and with a few synced alignment points, your mount GOTOs will work better, targets won’t drift out of frame, you’ll be able to take short exposures without guiding, and very long exposures with guiding. Your images should also be free of field rotation distortion in the corners.

Plonk your mount tripod so that the scope would be pointing as close to south as you can guess. You could use a compass, BUT magnetic north/south is not actually the true north/south we want. We want to align the pole that the earth is actually spinning around. The compass is a lie!

Here’s my trick. Use a smartphone planetarium app and look up and find a constellation or star near the pole. Or if you are setting up during the day, hold the app (I use SkyGuide) up to the sky and put it in fast forward. Boom – you can see the celestial pole because the stars are spinning around it! Point your tripod in that direction.

Don’t worry about being super accurate, just make sure the tripod is level for the mount. If you really screw it up too far from the pole and all your heavy gear is setup later, there’s no shame in putting your back into it and pretending to be Mr. Universe to lift and rotate everything a little bit. We’ve all been there. It works and is easier than stripping it all down to start again!

Set up the rest of your mount, telescope, and guide scope. Enter any calibration info your particular mount wants (date, time, GPS, etc.) and adjust the “ALTITUDE” axis (or as I like to call it, the uppy-downy one, as it makes your telescope go up or down) on the mount to match your latitude. E.g. – if your latitude starts with 28 or -28, the ALTITUDE on your mount needs to be angled at 28 degrees.

Once you’re set up and ready, do a star alignment as normal for your brand so the mount has some idea of where it is and starts tracking the approximate motion of the sky relative to earth (this is called sidereal motion).

Step 3 – Drift 1 at the celestial equator and the meridian

Don’t worry if you don’t know what these mean exactly, just follow these next two quick steps and you’ll be in the right area. 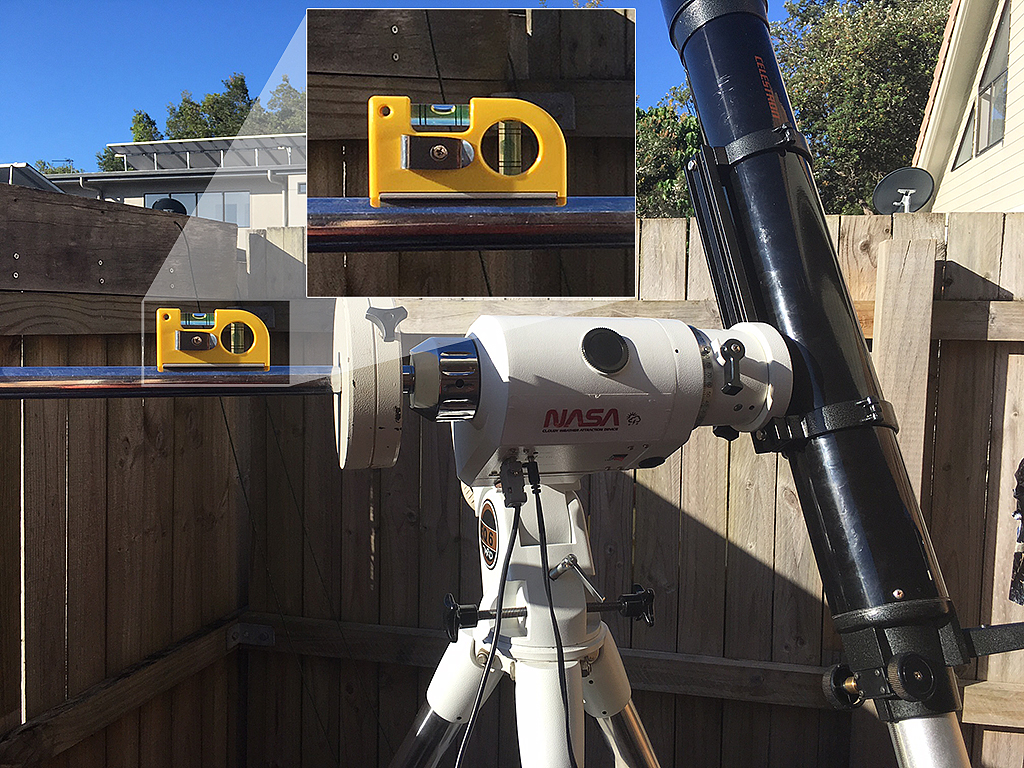 First, manually slew your scope east-west until the counterweight bar is parallel with the ground. Use your spirit level to make sure it’s totally horizontal. It doesn’t matter which way you rotate. 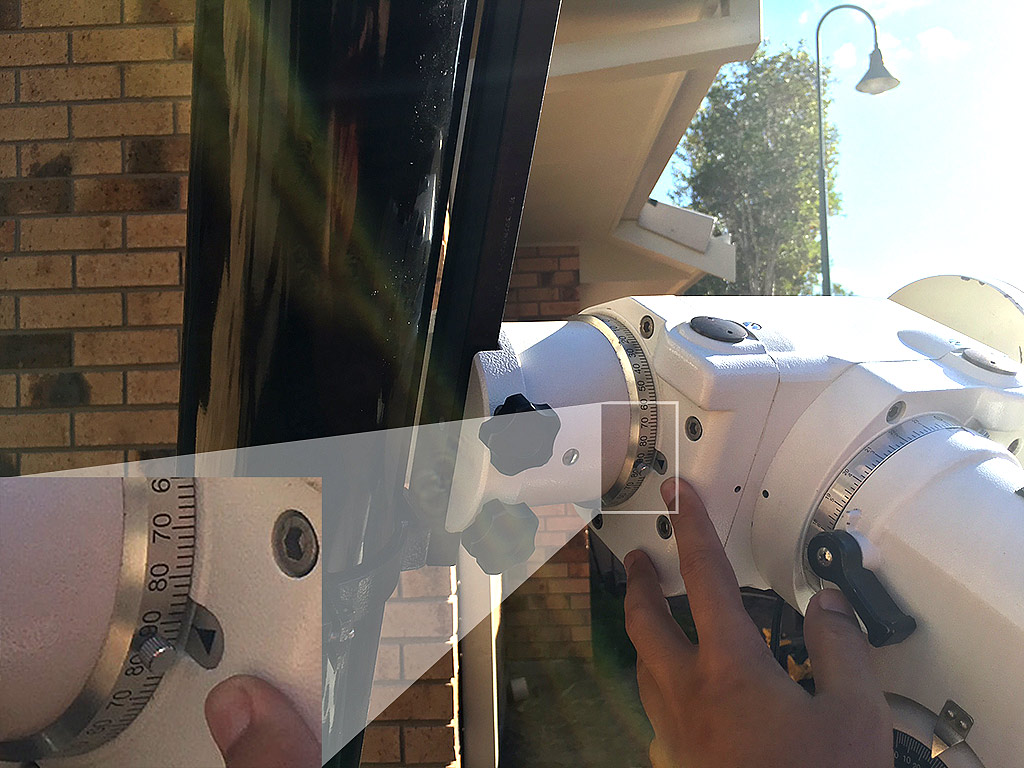 Your scope is now angled at a point in the sky 90 degrees away from the celestial pole (not a 90 degree angle to the ground… unless you actually live ON the equator, then it would be!) and along the north-south meridian line.

Now fire up PHD2, connect your guide cam, find a star and tell it to guide. It will calibrate itself and start guiding, poorly. Stop guiding and go to TOOLS -> DRIFT ALIGN. There are two screens in here for the two drift aligns we will do – ALTITUDE and AZIMUTH. We are adjusting the lefty-righty one first so we want to be in “AZIMUTH ADJUSTMENT”. 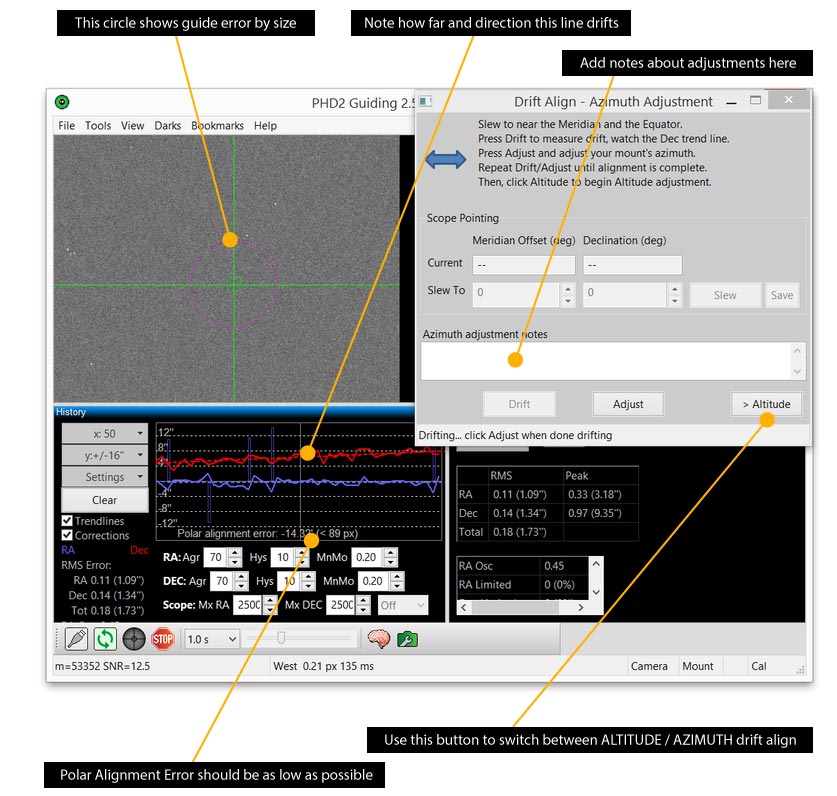 Here’s the crux of this whole process. Pick a star and hit drift and wait a few moments. Click “trendlines” on the guiding graph if it isn’t already ticked. You’ll see the RED line drifting UP or DOWN instead of staying flat. Give it 10-30 seconds at least. Remember which direction it’s going, then hit the ADJUST button.

Now fiddle with your AZIMUTH adjustment bolts on the mount (see picture below). Try, say, adding half a degree. Then hit DRIFT again. 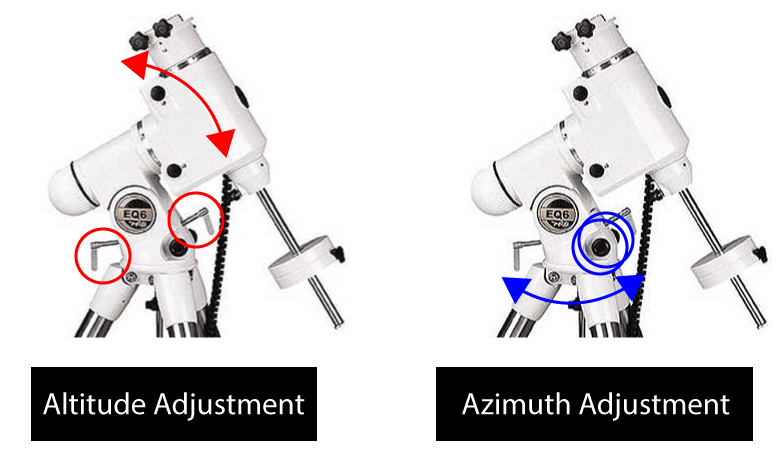 Did the RED line get closer to being flat? Or did it get worse? If it got worse, just click ADJUST and adjust the AZIMUTH angle on your mount in the other direction. If it helps, use the “Notes” section to write down your last steps, e.g. “red drifting up, turning left DEC screw…” or whatever you like. Repeat this process. DRIFT, ADJUST, DRIFT, ADJUST. You’ll soon get the RED line pretty flat. The magenta coloured circle around the star will get smaller and smaller with each adjustment. When it’s nice and small around the star – congratulations – one axis is aligned!

Point your telescope at a star or region of the sky roughly due east or west. Either is fine. Use your planetarium app on your smartphone to find something along the east or west lines of the sky and manually point to it. Ideally it should be low to the horizon if possible. Your guide camera will be able to see stars you can’t, just make sure you are generally pointing as west/east and as low as you can.

Head back to PHD2’s drift align tool and click on the ALTITUDE button, pick a star and hit DRIFT. Note the direction of the RED line and wait a few moments, then click ADJUST and this time, fiddle with the ALTITUDE (uppy-downy) adjustment bolts on your mount. Shift slightly in one direction, then click DRIFT again.

Keep repeating this (DRIFT, ADJUST) until you get that RED line as flat as possible and the POLAR ALIGNMENT number as low as possible. Don’t despair if you can’t get the error to zero, because you won’t be able to.  Some of that error is just the starlight twinkling and bouncing in the atmosphere and you won’t be able to adjust it out. Just get it as low as you can. 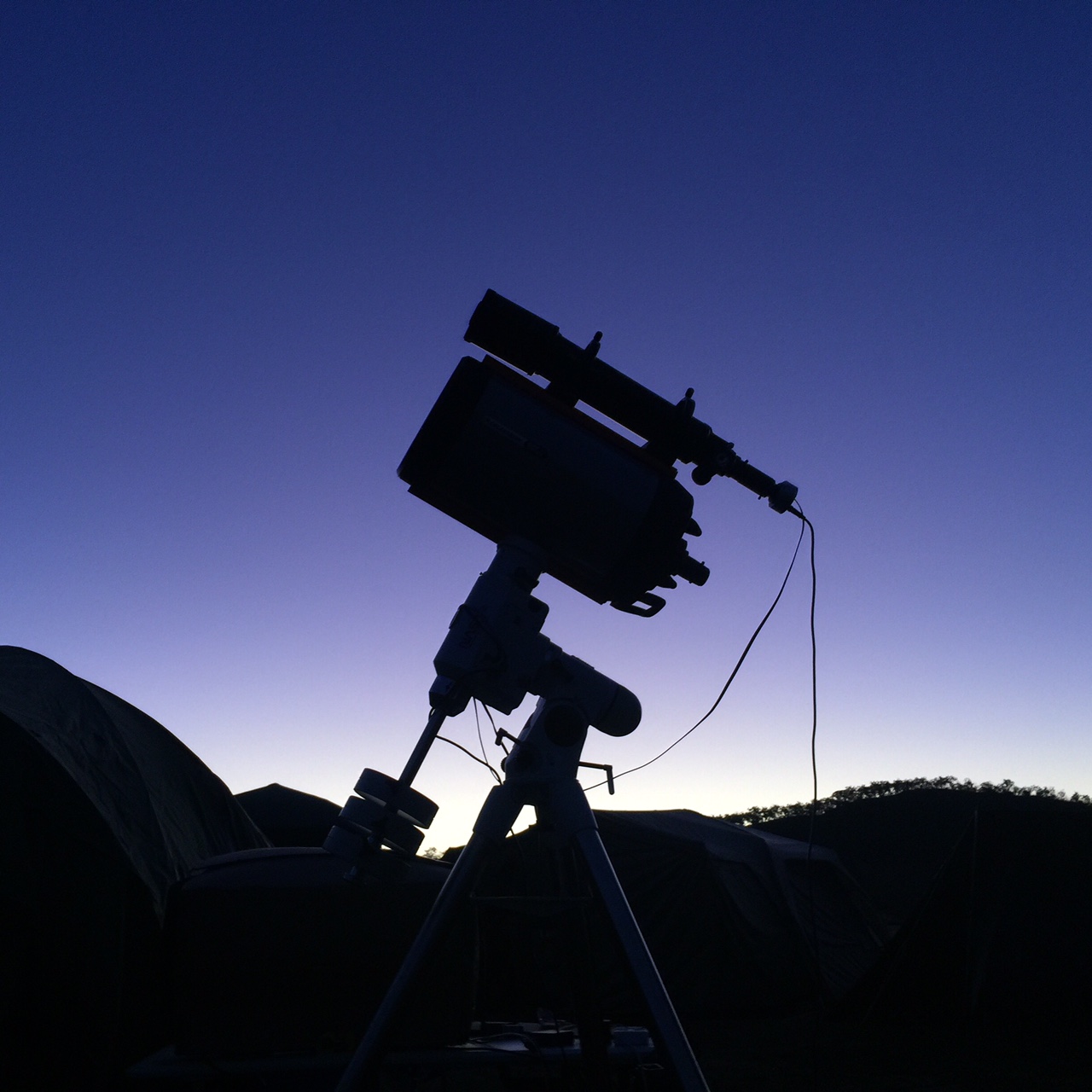 Congratulations, you are aligned!

At this point it’s best to do another star (or multi-star) alignment so the mount knows where it is again. Once that’s done you should be getting better GOTO slews, very little drift of your targets, and great guiding in PHD2 the next time you use it. If you did very well, you’ll even be able to do short unguided exposures.

There are lots of different techniques and tools for polar alignment, but any drift-based method uses some version of these steps.

If you have any tips and tricks for polar alignment, leave them in the comments below!

Thanks also to core PHD2 developers Bruce Waddington and Andy Galasso for their input and feedback on this tutorial. You’ll find Andy’s more thorough outline of PHD2 drift alignment here.

Dylan O’Donnell is an amateur astronomer and astrophotographer from Australia. He is listed in the credits for the open source project PHD2 for help redesigning UI elements, the PHD2 logo and the openphdguiding.org website.

If you are at home, mark the ground where the tripod legs are. This will save you time when you rough it in next time. If the mount isn’t changing locations, you shouldn’t need to do the east/west horizon / ALTITUDE drift alignment for a while. Just do the AZIMUTH / celestial equator drift alignment and you should be good to go. If the weather is good, you can leave your gear set up for the next night, or take the telescope itself inside as long as the mount doesn’t move. Then you won’t need to do any alignment tomorrow, just switch on and start framing, guiding, and imaging.

4 Tips to Compose the Perfect Astrophoto

The Exact Camera Settings I Used For a Total Lunar Eclipse