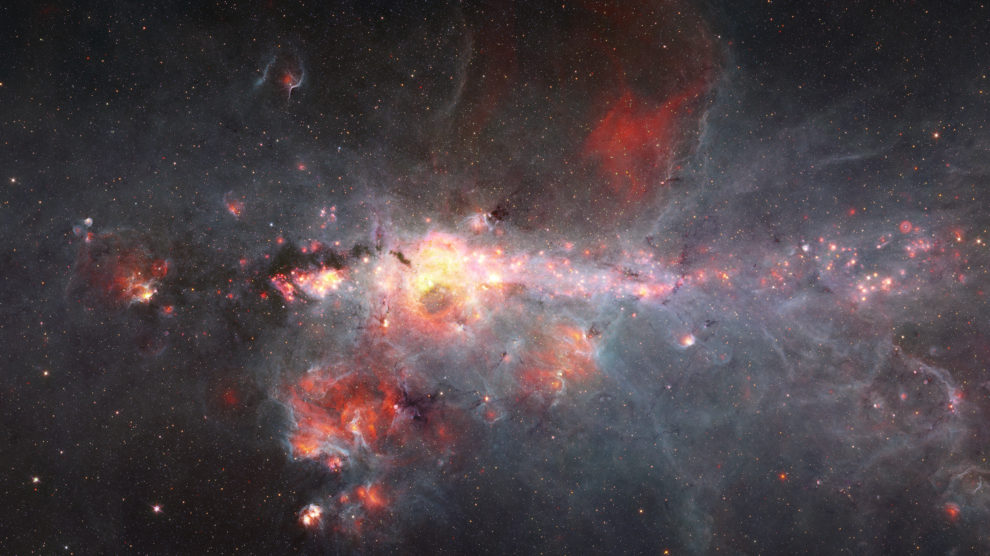 Clear away that pesky dust blocking your view of the most amazing, unseen nebulas.

How do we get there?

Want to check out the galaxy’s most happening place, but human eyes let you down? Tired of having your view blocked by dust? Infrared astronomy is here to clear away that obscuring dust and let you take in the Milky Way’s most inaccessible nebulas! See the interstellar medium glow like you never imagined in beautiful, micron-sized wavelengths.

To create this image, it was necessary to use data acquired by two of NASA’s space observatories: Spitzer, which surveyed smaller parts of the sky in great detail, and WISE, which surveyed almost the entire sky, but in less detail. By utilizing the IRAC4 and MIPS1 bands from Spitzer and the W3 band from WISE, it is possible to create an image that is more aesthetically comfortable than typical infrared imagery. These three bands reveal similar kinds of emissions, which makes for a pleasant amount of color separation. Something interesting about astronomical imagery is that if the chosen wavelengths are too far apart, sometimes the result is a brightly-colored, neon image. On the other hand, if we choose wavelengths that are too close to one another, the image might look almost black and white. 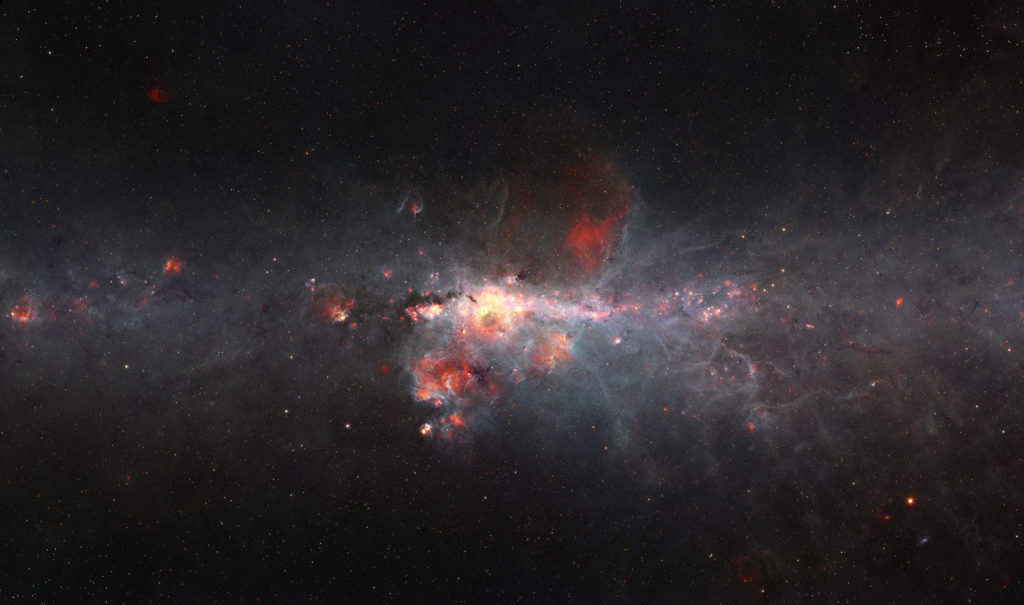 Welcome to downtown Milky Way. Here, we can examine some of the structures close to the nucleus of our home galaxy. Interpreting the image is not easy, but we can try. Where is the black hole? Directly in the center, but it’s much too small to see, even if it wasn’t invisible by its own nature. The galactic plane runs exactly horizontal across the image. Dust and gas are what we are looking at, and they are kind of fluffy and disorganized. If we were looking at just the stars, which comprise the bulk of the galactic mass, the plane would look much more flat, smooth, and organized. Dust and gas, however, are much more easily perturbed, and this leads to all sorts of interesting shapes and patterns. 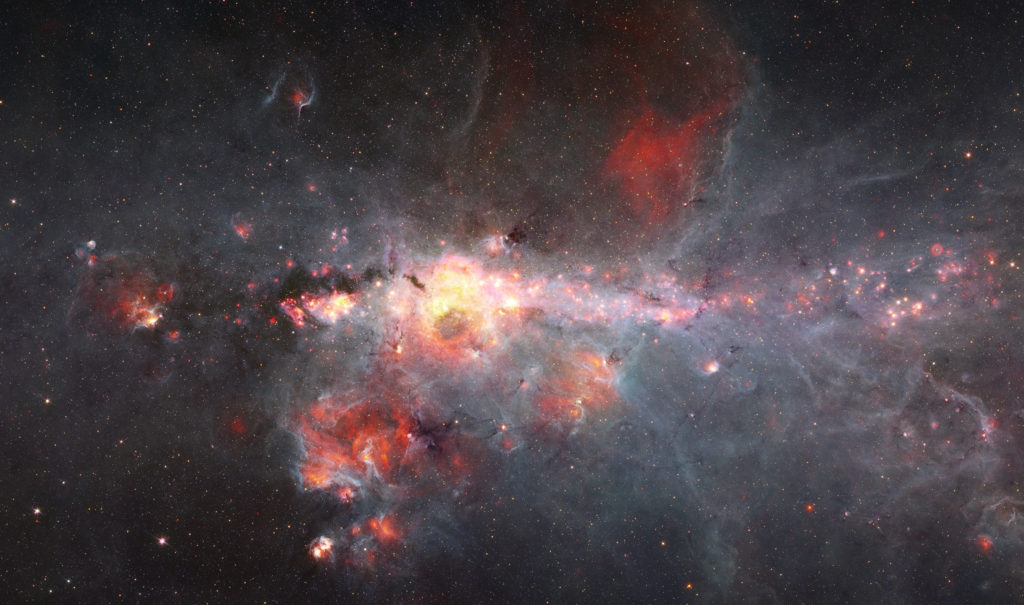 Something to keep in mind is that some of these structures are much closer in the foreground than others. It can be difficult to interpret which ones are really part of the center and which are line-of-sight foreground objects. Most of the larger ones are likely in the foreground. Some of the tiny ones are, too, though.

Smaller, spherical bits of yellow and red resemble exploding kernels of popcorn and glow with the fierceness associated with star formation. Larger, more diffuse redder areas echo these past events, expanding outward and still glowing from the remaining energy. As these clouds expand, they collide with other clouds, which causes their boundaries to become irregular and less spherical. 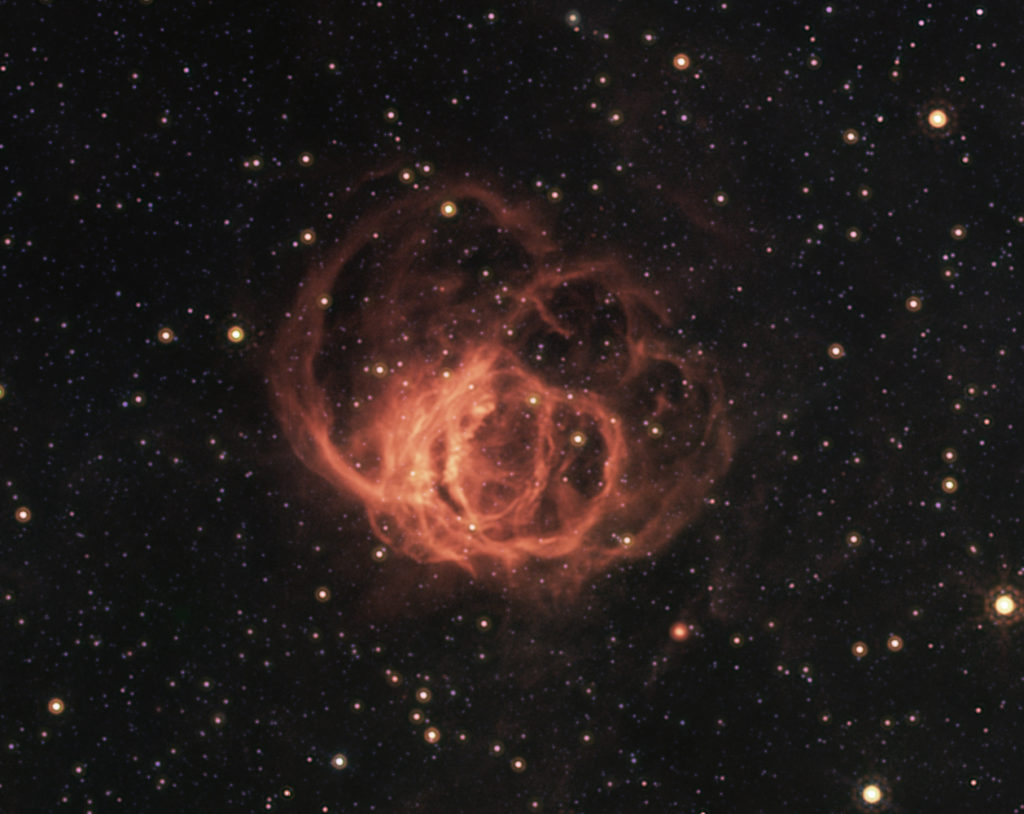 Other nebulas within the image are not evidence of star formation. The above example, processed differently to make it easier to see, is a nebula associated with a rare type of star called a Wolf-Rayet star. This particular example is part of an even rarer subset distinguished by certain oxygen lines in its spectrum. This object lies in the foreground. My friend Stephanie said it looks like a funnel cake and I agree. 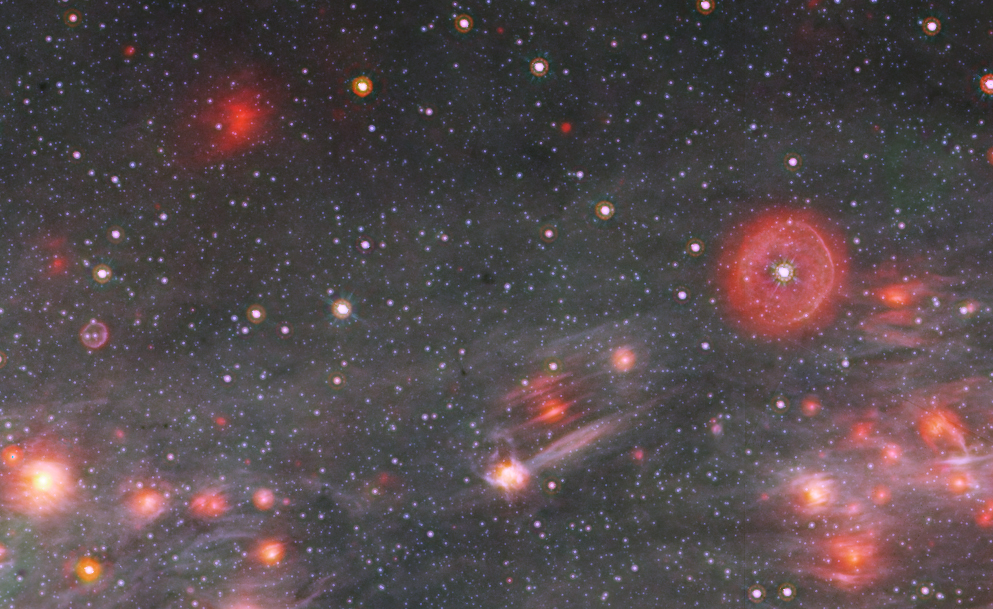 Two almost perfectly spherical shell nebulas separated visually by only 13.8 arcseconds appear on the right side of the mosaic. The larger one at the right is associated with a blue supergiant star and is located in the foreground, the star itself visible in DSS data in front of the Milky Way’s great dark band of dust. The smaller one to the left appears to be more distant and is obscured by the dust. Do not confuse the other small circles around the brighter stars in the image for nebulas. These are artifacts left by light as it interacted with the telescope. Other objects in this scene include distant areas of star formation and curtains of interstellar medium.

Totally different. Observe for yourself: 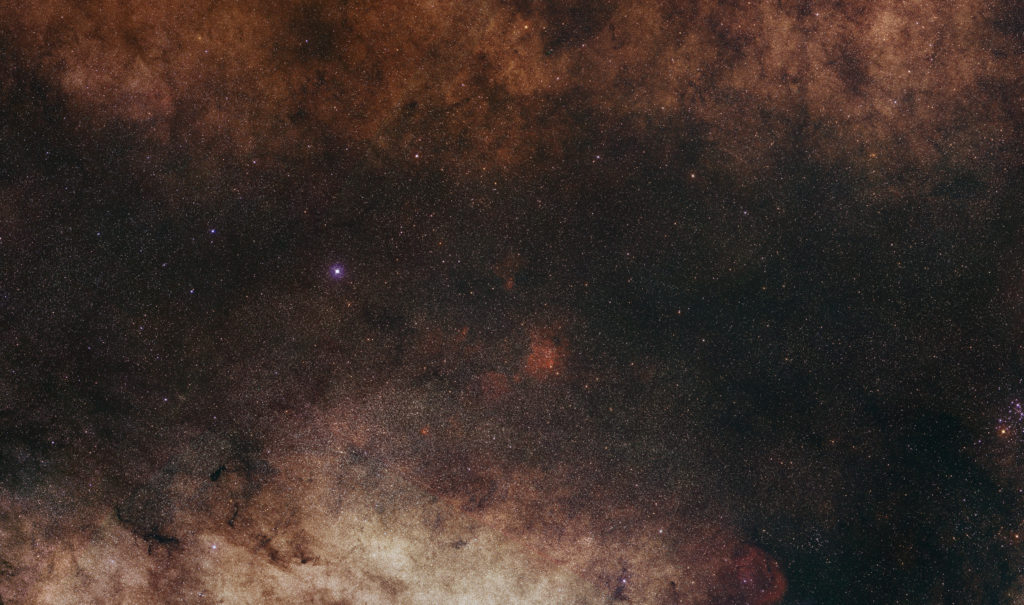 An interactive version is available here, where you can click to swap between visible and infrared views and pan around the large image. It may at first look like there is nothing in common between the two, but it is indeed aligned almost exactly, and there is a thing here and there which exists in both views.

I hope you enjoyed this peek into the infrared part of the spectrum. In a couple of years, the James Webb Space Telescope will be producing some magnificent pictures of things at much, much greater detail than this. There are bound to be some unfamiliar sights of some familiar objects, but also some new ones as well. If you are a fan of Hubble, then it is a good idea to become acquainted with infrared astronomical imagery now so that you can have a head start at understanding what you are looking at.

Hailing from New York City under some of the most light polluted skies, Judy Schmidt can often be found with her nose in an archive rather than outdoors. An expert image processor and amateur astronomer, she works almost exclusively with professionally obtained, publicly available data like that of the famous Hubble Space Telescope.

With a keen scientific mind and deep regard for the vast, distant, and often invisible cosmos, Judy loves to share the beauty that can be found buried in the treasure troves of public data.

How I got an APOD: Judy Schmidt