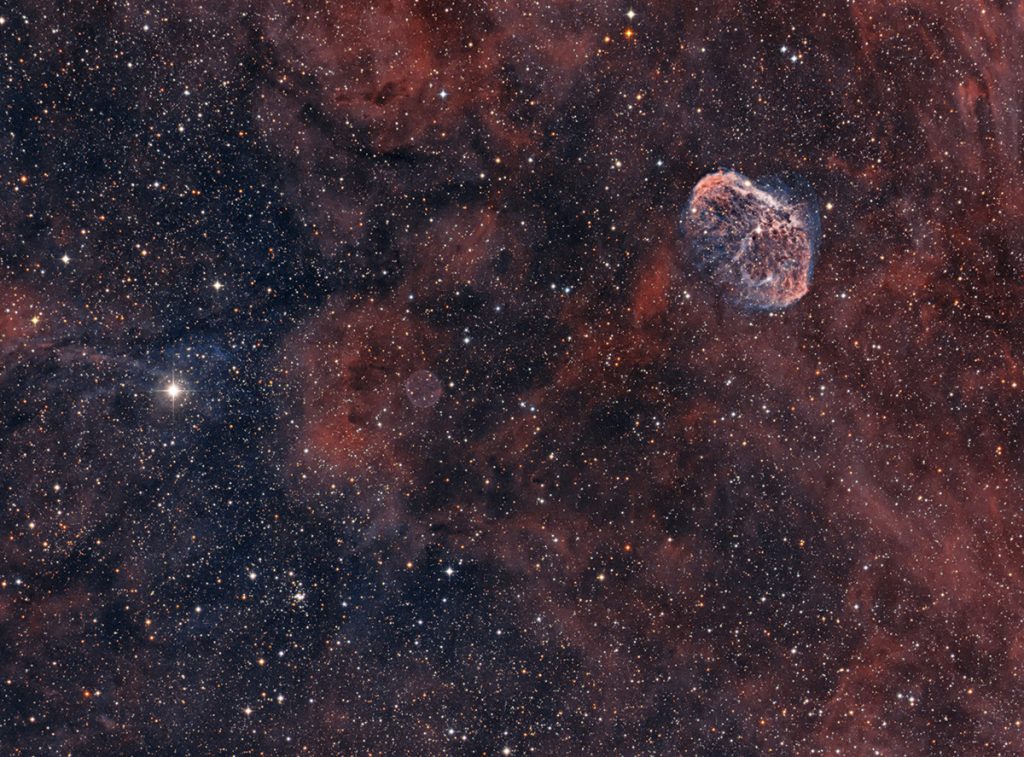 The “Soap Bubble Nebula” is the common name for the planetary nebula PN G75.5+1.7. This nebula was only discovered by amateur astronomer Dave Jurasevich on July 6th, 2008. It was independently confirmed and reported by Keith Quattrocchi and Mel Helm on July 17th, 2008.

PN G75.5+1.7 is situated in the constellation of Cygnus, very near the Crescent Nebula (NGC 6888). It is embedded in a large diffuse nebula which, in combination with its low surface magnitude, is the reason it was not discovered until recently.

NGC 6888, also known as the Crescent Nebula, is a cosmic bubble about 25 light-years across, blown by winds from its central, bright, massive star. This image uses narrow band image data that isolates light from hydrogen and oxygen atoms in the wind-blown nebula. The oxygen atoms produce the blue-green hue that seems to enshroud the detailed folds and filaments. Visible within the nebula, NGC 6888’s central star is classified as a Wolf-Rayet star (WR 136). The star is shedding its outer envelope in a strong stellar wind, ejecting the equivalent of the Sun’s mass every 10,000 years. The nebula’s complex structures are likely the result of this strong wind interacting with material ejected in an earlier phase. Burning fuel at a prodigious rate and near the end of its stellar life this star should ultimately go out with a bang in a spectacular supernova explosion. Found in the nebula rich constellation Cygnus, NGC 6888 is about 5,000 light-years away. (source: APOD)

I decided last year that I wanted to see if I could catch this very faint nebula with my 9.2 cm refractor. I started working on imaging this in 2015, but then I only got 4 images before weather interrupted the imaging sequence. It was only now that I was able to catch more data of this region to see what would come out in the last week because we had great observing weather, but unfortunately a full moon. Last week I took for 5 days in a row images of this nebula in H-alpha, OIII and RGB. It was a good way to follow the olympics during the observing time!