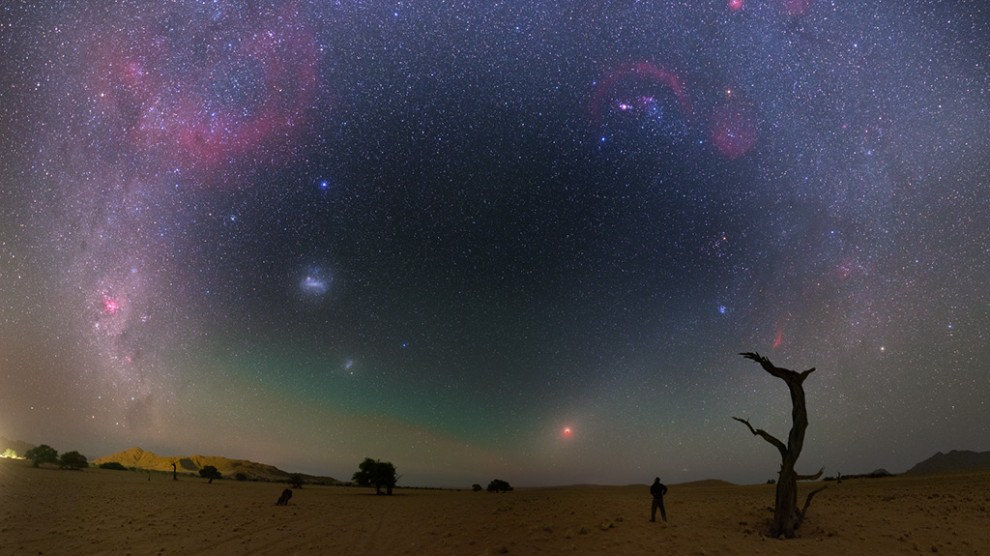 In the early morning the moon went through the Earth’s shadow, producing a spectacular total lunar eclipse.

This was the fourth in the unusual tetrad of eclipses in 2014 and 2015. Actually, there was much more about the uniqueness of this phenomenon. The moon was closest to the Earth just an hour before the maximum of the totality so the “bloody“ Full moon was the largest of the year.

Also the eclipse was unusually dark, most likely caused by ashes of Chilean volcano Calbuco, which erupted in April 2015. That allowed me to capture this panorama from the “heart of Namibia“, Sesriem, a site close to the world’s famous Namibian orange dunes.

By showing morning Milky Way filled by numerous hydrogen nebulae in Orion, Vela, Monoceros and other beautiful constellations, you can notice perfectly dark skies there.

But probably the most interesting is just across the red moon, a faint belt of zodiacal bridge with brighter Gegenshein just where the moon is situated. It’s because both are in the opposite direction to the sun in the sky. A faint green airglow on south-west horizon, just under the Magellanic clouds, is partially covered by a stripe of orange sandy dust in the atmosphere, as the cold wind was blowing from the Atlantic ocean to the dunes.

Watching the eclipse in this dry and open wilderness was one of the top experiences in my life. I would like to thank to Safra-go company for realisation of this great way.

How I got an APOD: Mia Stålnacke