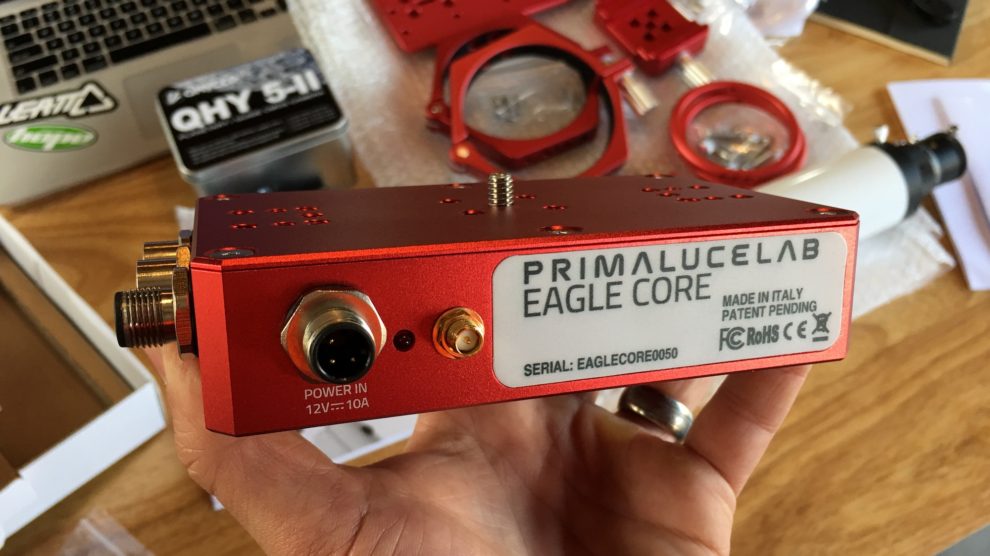 This article can be summed up with: so far, I dig it.

I’ve recently partnered up with the folks at PrimaLuceLab to test out and use a new device that I’m hoping will make our lives easier: the EAGLE CORE control unit for DSLR astrophotography and their autoguiding package to go with it. These are my initial thoughts about the hardware, software interface, and generally the way it works.

Let’s be honest here — I’m a #gearporn junkie. I think many astrophotographers are. But, I’m also a picky S.O.B. when it comes to fancy new tech. By day I’m an embedded software engineer (I make this stuff!), so I know what goes into it. I usually don’t trust it, and it’s hard for me to get genuinely excited.

So, what is the EAGLE CORE?

The EAGLE CORE is self-described on the box as a “control unit for astrophotography with a DSLR camera“. When you use with your tracking telescope mount, it promises to make life easier for the beginner astrophotographer who just wants to start out getting good shots of deep-sky objects without worrying about all the computer and software requirements that go along with this usually difficult-to-enter hobby (obsession!). 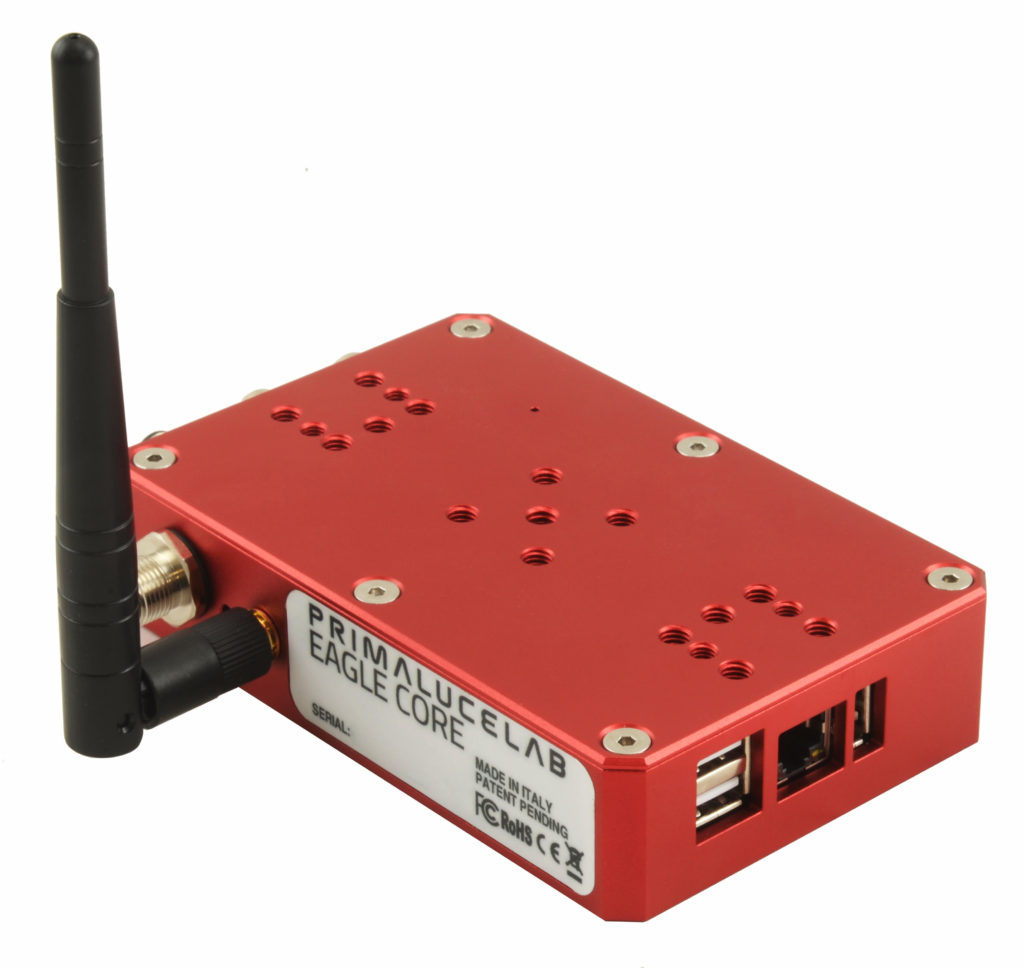 But really, what is it…

Think BackyardEOS and BackyardNIKON with PhD Guiding, without the need for a separate computer, simplified, and in a slick anodized red metal housing. It is controlled via wifi with any wifi-enabled tablet, phone, or computer on it’s own wifi network, or via wired ethernet. You use the EAGLE CORE in conjunction with your tracking mount for DSLR control and image preview, as well as autoguiding control.

I can tell you from what I have learned in the early days playing with it, is that the EAGLE CORE is much more than just a DSLR control unit. Using its own wifi (or wired) network, you can connect to it with ANY device or operating system (HURRAY!). There are no apps to install and no drivers or software to update (unless there is an update for the firmware on the EAGLE CORE itself). It has support for DSLR and mirrorless cameras, and (currently) two different autoguiding cameras. Which brings me to the point that it has an autoguiding system built into it! There are also three different 12v power output ports, so you can power your mount, camera, or other peripherals if you want. Less cables means less problems.

But why? Because astrophotography is hard.

The best equipment is the gear you use the most.
The EAGLE CORE is aimed at the beginner astrophotographer who wants to start shooting deep-sky space objects like galaxies, nebula, star clusters, etc. However, I’m personally excited about what it can do for me, the experienced constant learner.

Often times major bottlenecks are thrown into the flow of even the most experienced astrophotographers, like the myriad of cables, software packages, computers, software updates, guiding problems, camera connection issues, and on and on. Anything that can help to simplify the process and alleviate these issues is a welcome sight, and the EAGLE CORE aims to make your first foray into deep-sky imaging easier and more fun. People tend to be lazy, hobbies (obsessions!) are supposed to be fun, and if half the time you have a problem with your gear, it kills the spirit. Trust me, I’ve battled with it myself recently.

I believe that the relatively small size of the astrophotography market itself is a reason that many companies do not drive real innovation, but Filippo Bradaschia, CEO of PrimaLuceLab, seems to be as excited about this stuff as I am. After several months of consideration, we’ve decided to partner up with PrimaLuceLab to use their EAGLE CORE system and autoguiding package. I haven’t even hooked it up to our AP systems yet for a proper night-shoot test, but I’m already excited about this thing.

And remember, no matter how much money you spend and how good or fancy or sexy or high quality or low quality your kit is, the best equipment is the gear you use the most. A scope sitting in its case in the closet or a computer waiting for software updates and not doing its job is worthless no matter how much you spent on it! Simplification is often the best choice, and that’s what the EAGLE CORE promises.

Start with the packaging

The boxes and packaging alone seems to display that PrimaLuceLab cares a lot about their product quality. Every component was well-packaged and bubble wrapped, and it made the trip from Italy to South Africa safely and quickly without a scratch. Seriously — bubble wrap FTW. Check this quick unboxing video:

What was in the box

All of it was lovingly imprinted with the PrimaLucaLab logo, which looks pretty sexy as well, with the exception of the QHY5L-II guide and planetary(!) camera, of course. Here’s what we got:

What it doesn’t say on the EAGLE CORE box is how gorgeous this piece of hardware is, physically. Hubba hubba.

If I were to sum up the build quality, fit and finish, and overall feel of this kit, I’d have to say “beautiful.” It’s like when I opened my brand-new Macbook for the first time, you just want to feel it, the weight and edges. Attention to detail is second to none, in my experience. It will fit right in with our Officina Stellare APO…apparently we have a thing for Italian kit. Everything has a beautiful and perfect anodized finish, it’s a pleasure to see the forethought into it all. 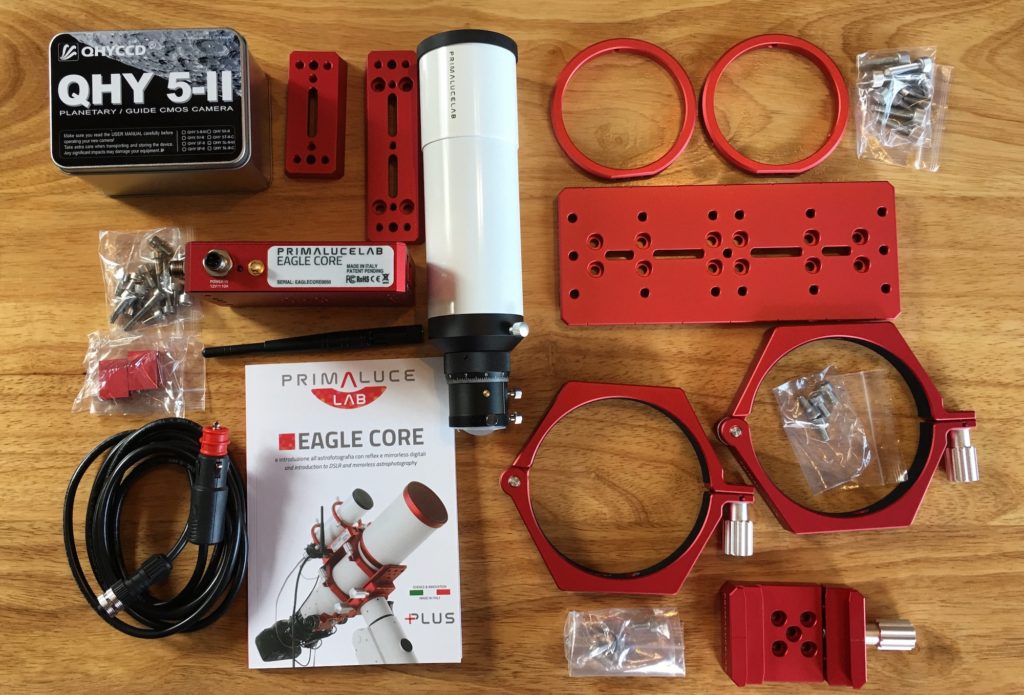 And it’s not just finish. I was very surprised at the tolerance for the little things, like the screw threads. At one point I thought the screws for the autoguider package were too long when I tried one of the many attachment configuration options to the EAGLE CORE, but it turned out that they were instead perfect to the millimeter. My bad, I’m not used to that. My dealings with PrimaLuceLab so far have also demonstrated a very large amount of pride and concern over the quality of the products they make.

For now I’ve only done some early testing, but the software interface between the frontend on the wireless gadget of your choice (sweet) and the EAGLE CORE is pretty good. It looks nice and feels quick when you use it.

The cool thing is, you don’t need to install any applications, which is very user-friendly. Simply connect to the wifi network created by the EAGLE CORE with any external wifi-enabled device, and fire up the web browser (I use Chrome) and go to an IP address where the EAGLE CORE front-end application (EagleApp) is just waiting for you. It actually took me a while to wrap my head around a process that easy, especially regarding astrophotography.

At first I started playing with the EAGLE CORE using my iPhone as the front-end controller, and that worked just fine. I also have a mostly-unused Nexus 7 Android tablet and wanted to use that instead, with the different OS, bigger screen, etc. It also worked fine. You can also use a computer, or iPad, and supposedly any wifi-enabled device with a web browser.

Once you press Start acquisition, it shows you the number of shots left, the camera settings you chose, camera battery level, and displays a zoomable JPG of the most recent completed exposure to follow the progress. All images are automatically stored in raw and jpg on the camera’s memory card just as if you were shooting like normal. 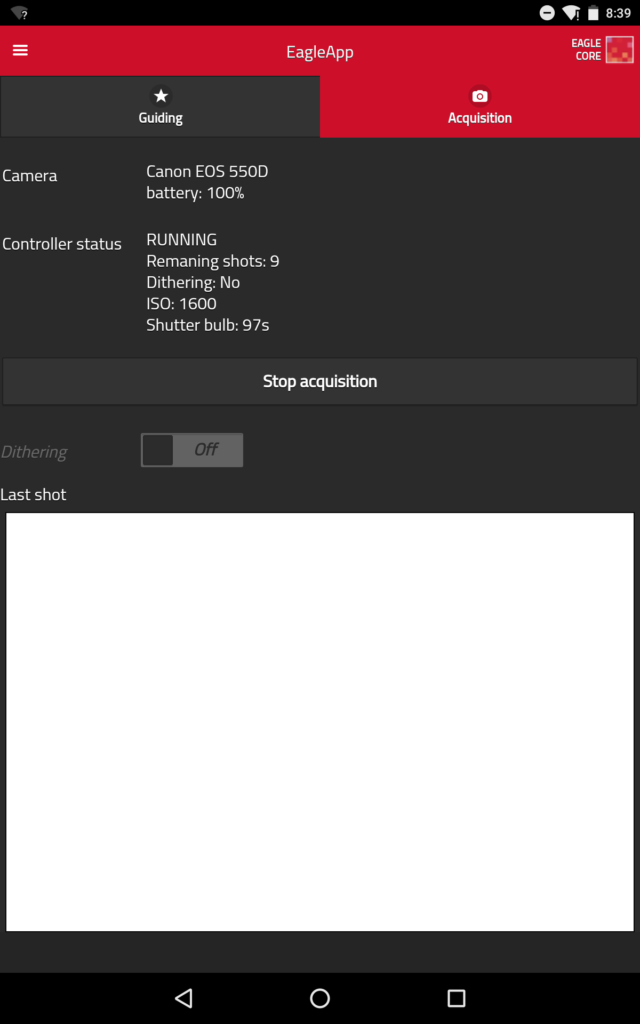 What I like a lot about the way this works is that the control of the autoguider and DSLR camera is done completely on the EAGLE CORE hardware itself. Nothing happens on the front-end application on the tablet/phone/etc. This is good, because it means you don’t have to worry about accidentally unplugging something, walking away, etc., and causing problems. Ever tripped over the camera cable connected to your computer in the dark and screwed up your imaging session? Yeah, me too. But, that won’t happen with the EAGLE CORE.

Watch for a series of articles coming up as there will be lots more to come while I test (play) with the EAGLE CORE and the autoguiding package from PrimaLuceLab. I’m hoping to incorporate it into most of our DSLR astrophotography because it is so slick and portable and easy, so stay tuned!

So far, I dig it! Questions? Feel free to ask anything in the comments below!

Single vs. Multiple Exposures: Is Stacking Worth it?