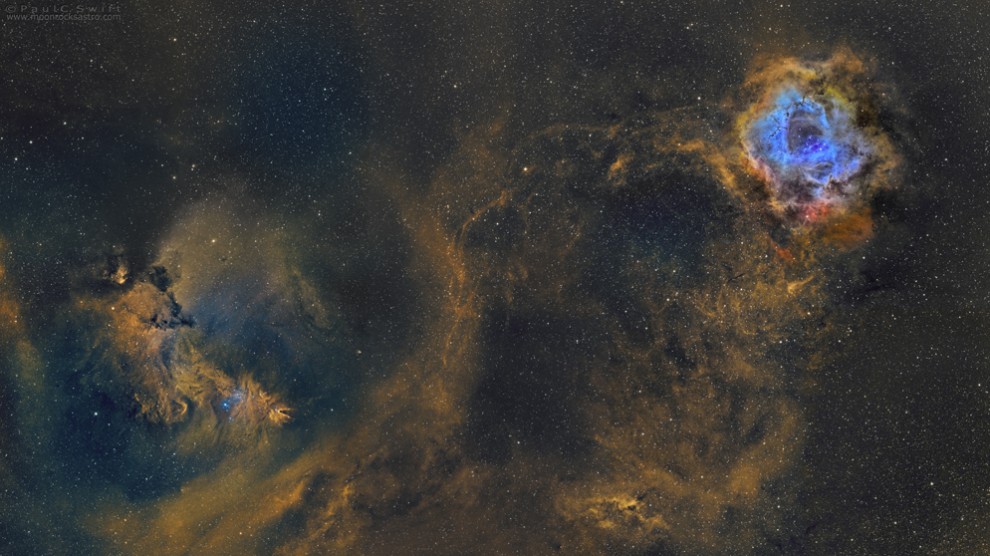 A 10-panel mosaic of Monoceros, the unicorn — home to the Rosette Nebula , the Christmas Tree Cluster, and the Cone Nebula

I set out to produce a portrait of the Monoceros area, including the space bridging the very dramatic Rosette Nebula with the Cone and Christmas Tree Cluster. I had realized that this was no small task and began by talking about the idea of a joint project with an American astrophotographer. The idea would have been that we would start at opposite sides of the mosaic and meet in the middle!

With life’s commitments it is always harder than one expects to synchronize schedules, cameras, telescopes, and everything else required for such an undertaking. Needless to say there was a hiccup with the purchase of a new format camera and my plans went south. After some deliberation, I decided to go it alone.

I used Sequence Generator Pro [SGP] software for working out my composition and for data acquisition. The framing wizard helps tremendously in fine tuning and setting up composition. A quick session in SGP produced a neat grid of panels across my composed frame (fig. 1). It looked so neat and simple sitting on my desktop, seeing it all laid out in those nice little panels!

I was on my way now, all I needed was around 100 hours of clear, dark, moonless sky. Too much to ask? Funny how one’s plans are always so hopeful! During the shoot I experienced every weather variable imaginable, apart from snow. Including some seriously high wind that ripped through my neighbors outbuildings, shattering his fiberglass roof.

I have a simple home observatory here in Valencia (fig. 2). This is a hugely important factor in being able to produce large narrowband works. It means that my setup is permanently protected and quick off the mark to get up and running. I started off looking to get the Hydrogen Alpha [Ha] in, “full speed ahead.” Roughly 1800 seconds x10 exposures x10 panels plus some extra data from the year before.

Fortunately, I had a run of clear, but windy, nights. I could hear the neighbor’s palm trees whining ominously. The stalwart brick walls of my home observatory served well in shielding my setup from the endless buffeting winds. I closed the metal door and went to bed.

The next morning there the data was. To my surprise it was quite good! Pretty soon I began to gather sizable quantities of data and it was time to see how it all meshed together using PixInsight’s mosaic tools for a quick rough and ready merge (fig. 3).

Next I began to collect the Oxygen III [OIII] data and collate with data acquired from the previous year. Some Sulphur II [SII] was also used for the Rosette area. I always keep my camera angle at 180 degrees, year in and year out. That way no data ever goes to waste and is always compatible with ongoing work.

With the OIII now gathered, it was time for a very long editing session. I used both PixInsight and Photoshop, as well as Straton for star removal. PixInsight was used for calibration and for mosaic merging. This is a fiddly business and required some patience and some assistance from Photoshop.

Two days later I emerged with a finished image ready for print. I may well revisit Monoceros next year and expand the mosaic. The beauty of astrophotography is that there is always enough universe to go around.

Equipment used for the making of this image

Having had a background in the arts and worked professionally as a cinematographer and lighting cameraman, astrophotography made for a natural change in focus. Paul had always wanted to turn his camera to the skies. A move away from London to Valencia, Spain, presented him with the perfect opportunity to do just that. The artwork you see on his website was produced using basic equipment from a modest home observatory.

Announcement: 2016 Image of the Year Finalists

Shooting Omega Centauri with the EAGLE CORE for DSLR Astrophotography

Transit of Mercury: The View From You