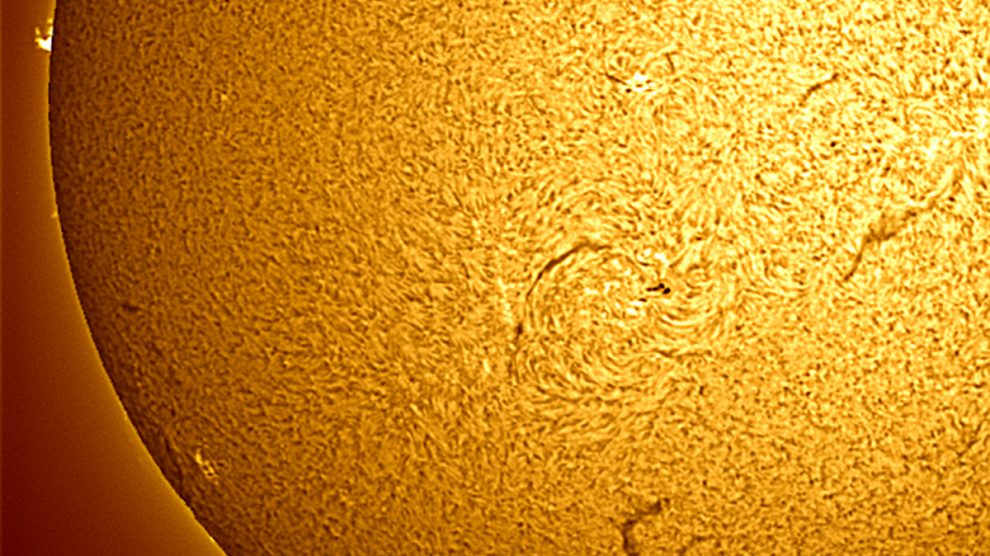 This article was adapted from the original, by permission of the author.

A Mercury transit takes place when the planet Mercury passes directly between the Sun and a superior planet, becoming visible against (and hence obscuring a small portion of) the solar disk. During a transit, Mercury can be seen as a very small black disk moving across the face of the Sun.

The little black dot on the edge of the Sun, in the picture below, is Mercury. This tiny black dot took 7.5 hours to cross the disk of the Sun. During that time it was visible to me for about 20 seconds. Any pictures here were taken by me using 2 telescopes with a camera mounted on each one. I didn’t know I had captured this image until later in the evening. Camera was on auto, with just this one image with anything on it.

A lot of work would be involved in the setup I intended to use to capture the event. All sorts of methods of capture were options for me. I was also wanting to do an animation for at least part of the transit. So my plan was to install a double mount onto my fixed pier inside my observatory. This would allow me to mount 2 telescopes. Some parts I had to cobble together and others I already had and some I had to buy. After a few days I had exactly the setup that I wanted which also allowed me to move my solar scope independently of the mount. I wanted this as I intended to get a close up of a sun spot but still to be able to get a full FOV with my second scope. See below for the final setup picture. Each scope was connected to a W7 laptop along with a Canon 1100D and a DMK21 mono planetary camera.

I arranged to take a holiday from work so that I would be able to spend the day capturing this event. When I woke up I could see that it wasn’t going to be easy. The weather was not playing ball.

However, I was determined not to be down about it. I took my wife out to breakfast before entering my observatory. This event was, for a change, at a very civilised time of day. With a hearty breakfast inside of me I opened up the observatory. I was not going to feel down about the totally grey sky, the forecast was not good though. The best so far was that I had seen a bright glow through the clouds.

Twitter friends from all over the UK were getting really excited about it. Tweets soon made it clear that the good weather was up north. Hardly anybody south of London was confident, although we were certainly not going to give up. My location near Gatwick seemed near hopeless. As the start time of 12:12 BST approached I did start to feel down. No break in the clouds.

Then with about 10 minutes to go my wife pointed out some blue sky. She got excited but I could tell it wasn’t in the right place. Somebody nearby was going to get lucky but it wasn’t me.

I did kick a few flower pots!

At 12:11 I went into my observatory and turned on my Canon 1100D from the laptop. I let it run on a pre-set sequence using BackyardEOS. I had focused this all up the day before and had intended to check it pre-event but there was no chance.

I am not even sure why I turned it on as all I could see was slightly brighter sky. My attitude was that that I had put so much into this I was damn well going to make the equipment do some work. Glad I did now. I could see nothing from my Solar Ha scope which is a Lunt LS60 Ha with B1200 filter.

A NASA feed showed me the transit was underway. There were even pictures of Mercury before it got onto the disk, illuminated by the chromosphere. Some amazing images, but none for me.

I spent 2 hours like that. I didn’t want to leave my mouse (trackpad actually) in case a clearer view arrived. I wasn’t hopeful of clear blue sky. Very bright haze would have been good, but nothing. I was really pissed off! At this point I thought I would have been better off at work, so I wanted to do something constructive. I cut the grass instead.

So, up and down I walked with the mower, cursing my luck. Preferable to kicking the dog but not what I wanted to be doing.

It happened, 20 seconds to success

Then I noticed I felt warmer. Yes it was also brighter. I left the mower round the front of the house, grass half done and rushed back to my observatory. Who cared if the mower got nicked. I dived into the observatory and turned on the DMK21 camera and put my Canon 1100D into auto mode. On my screen I could see the clouds scudding across the sun. They came and went and came back again. I had turned the AVI time right down to 5 seconds as I knew I wasn’t going to get long. I took 3 of these and then did a quick overexposure to capture any Prominences that might be there, although I didn’t have time to see them. So in total I had 20 seconds of video. That was it. The clouds engulfed the disk again and it wasn’t until the next day that I saw the Sun again.

I replayed the AVI clips and I was over the moon (or was it the Sun?). My high expectations were gone but it didn’t matter. To at least some extent, I had captured the Mercury transit. These were not going to be great pictures but I really didn’t mind.

I finished cutting the grass, then went to my laptop and started looking at Registax to see the beginnings of my images. I was delighted. I will let you judge if they are any good but all things considered I think it had all been worthwhile.

Just 20 seconds changed it from a disaster to success. Amazing! Got the grass cut, too.

I have missed more of the “special” events than I care to remember. That’s one of the things about us astrophotographers, we carry on despite the difficulties and to each of us, our results are priceless.

It also turns out that the initially sequence I took right at the beginning captured 1st contact. Out of 60 JPEGs only this one had anything on it at all.

The solar image with prominences was created from two 5 second video clips. Taken on a monochrome DMK21 camera and a Lunt LS60 Ha telescope. One clip is for the disk layer and the second clip for the prominences. Registax processed 214 frames for both images. I used a little wavelet adjustment and then saved both as 16bit TIF images. I then used Photoshop CS4 to put both layers together.

#AskPS: How do I find focus on the sun with no sunspots?

How I got an APOD: Judy Schmidt

Shooting Omega Centauri with the EAGLE CORE for DSLR Astrophotography

We’ve created an easy to understand 1-page cheat sheet to photograph the Milky Way, star trails, and the moon. Get started TONIGHT!

We’ve created an easy to understand 1-page cheat sheet with the essential DSLR astrophotography settings you need to know. Photograph the Milky Way, star trails, and the moon. Get started TONIGHT!