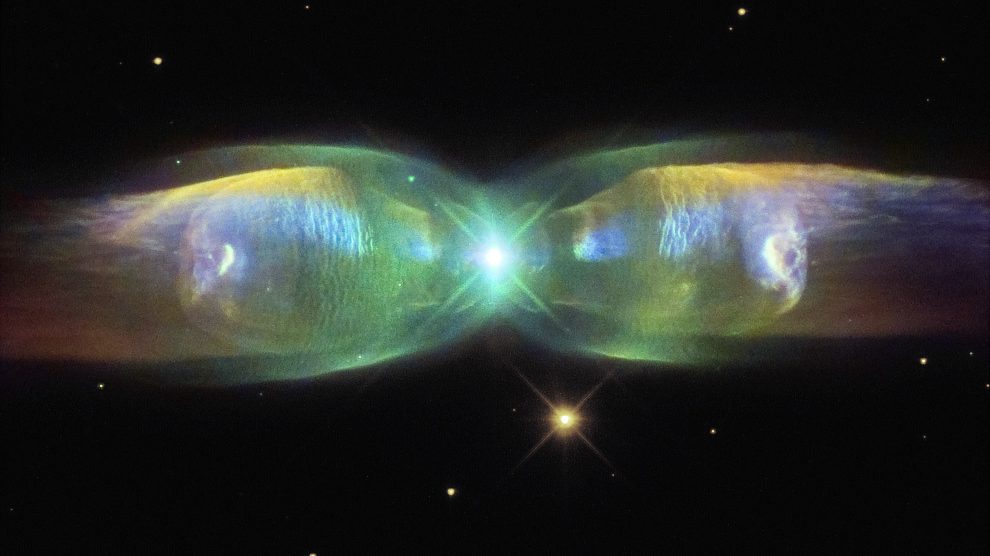 First and foremost, I must state that I did not set out with the goal of getting an APOD. My foray into image processing began with my interest in a contest by ESA called Hubble’s Hidden Treasures. With it, they invited the public to browse the archive and uncover unpublished morsels. With some hesitation, I began to explore the archive and the cosmos. I never expected to win third place in that contest and definitely never expected to have anything featured by APOD. After all, APOD is for high-end amateur astrophotographers with expensive telescopes and Hubble is for professional astronomers, right? What do I know?

The search for the data, the Hubble Legacy Archive (HLA)

I had no idea what I was doing. I searched for cat because I did not know how to find an object without coordinates and with no name. Strangely, a rather amusing gravitational lens was the result, and soon I had processed my first image. I still do not know why searching for cat brings up that dataset, but I like to imagine that some scientist thought it looked like Lewis Carroll’s Cheshire Cat. Ironically, that object was eventually processed again by the ESA people, and it was met with tremendous and unexpected fanfare. It was not my work, but I nonetheless felt proud of it, like I played a small part to bring it from its humble position under a large pile to a moment of Internet fame.

By the time I began work on Minkowski’s Butterfly, ESA’s contest was long over, but I was still going. It was over a year into my addiction—hobby, I mean—when I became fascinated by a class of objects known as planetary nebulas. The transformative convulsions of stars at the end of their capacity for nuclear fusion are beautifully perplexing, and within this class of objects are the young formations called pre-planetary nebulas, or PPN. Minkowski’s Butterfly (M2-9) is one of the closest of these, making it an ideal candidate for study and imaging.

I became enthralled by this object the more I learned about it. For instance, it is actually a variable nebula with spotlights shining against these long, collimated outflows which can be seen rotating like a lighthouse over the years. I hungered for more, and while I normally omit spectrographic results from instruments such as STIS (Space Telescope Imaging Spectrograph) from my searches, this time I was desperate enough to try anything. Surprisingly, nestled between some dark and unappealing results was this thing of exquisite detail. It was shocking and unbelievable and my palms got sweaty while my heart beat rapidly. Yes, seeing each individual crinkle and crenulation of those outflows got me excited enough for an adrenaline-fueled rush.

The first thing I did was take the two available exposures and combine them to get rid of many of the cosmic rays. One of the problems with being in space is that your telescope is bombarded constantly by these pesky things. They can be a real hassle to clean up. With less than four exposures available, some manual removal must also be done. Another typical cosmetic task was to remove the charge bleeds around the bright stars. Charge bleeds are usually called blooming by astrophotographers. I learned to call them charge bleeds through the instrument documentation, so that is what I call them.
Small note: It’s important to read the manual when working with complicated instruments.

The next step was to figure out how to bring some color to the picture. What was I looking at? It was captured by Hubble’s spectrograph, but it clearly doesn’t look like a spectrograph. Luckily for us, no grism was used this time. Why was it even imaged like that? I don’t know all the reasons, but I do know it was part of a parallel observation program—while Hubble is looking at something with one instrument, the other instruments look around at secondary objectives, often at nothing more than Milky Way stars, but sometimes tantalizing tidbits like this can be found. Understanding what kind of data it was, I decided to use it as a luminosity intensity map.

For the color, I scrounged up some lower resolution narrowband data which had been collected about a year prior to the STIS image by Space Telescope’s venerable WFPC2 (Wide Field Planetary Camera 2, pronounced wiff pick 2). The timing is important due to those moving shafts of light I mentioned earlier. After a year they’d already moved a little, but it was close enough to work. I felt lucky that Bruce Balick’s observations included the right data at the right time, otherwise it may never have received a color treatment. The F673N data became the red channel, the F658N for green, and the F502N for the blue. That’s Hubble jargon for narrowband filters at 658, 673, and 502 nanometers, respectively. Colloquially they would be known as Sulphur II (SII), Hydrogen alpha (H-alpha, Ha), and Oxygen III (OIII) filters.

I eventually scrapped the H-alpha data and replaced it with the STIS image in the green channel because it looked much clearer to me, and also because I was still honing my process and didn’t quite yet know what I was doing. If I did it again today, no doubt I would do it differently.

The whole process was fervently rushed overnight. I was dead tired by morning and still had trouble sleeping. I felt that I’d found a gold nugget and I wanted to share it with the world as soon as I could. How, though? I’m not exactly famous. I was very pleased when it was selected for APOD because then I knew everyone would get to see it. I could calm down after that.

While I do hope for more APODs in the future, the prospect of being featured is not what attracts me to this hobby. It is the science and the joy of exploration that motivate me. Through public funding of astronomy, these wonderful resources have been made available to everyone. Anyone with a computer and an Internet connection can utilize high-quality data from space and ground-based observatories. I don’t personally own a telescope, but maybe I don’t need to. Hubble is quite a good one.

Want to learn how to process archival data like that from the Hubble Space Telescope? See my tutorial on how to get started using Hubble data!

Hailing from New York City under some of the most light polluted skies, Judy Schmidt can often be found with her nose in an archive rather than outdoors. An expert image processor and amateur astronomer, she works almost exclusively with professionally obtained, publicly available data like that of the famous Hubble Space Telescope.

With a keen scientific mind and deep regard for the vast, distant, and often invisible cosmos, Judy loves to share the beauty that can be found buried in the treasure troves of public data.

The Big 5 of the Southern Sky

What is ‘Deep Space Imaging’ – Part 1