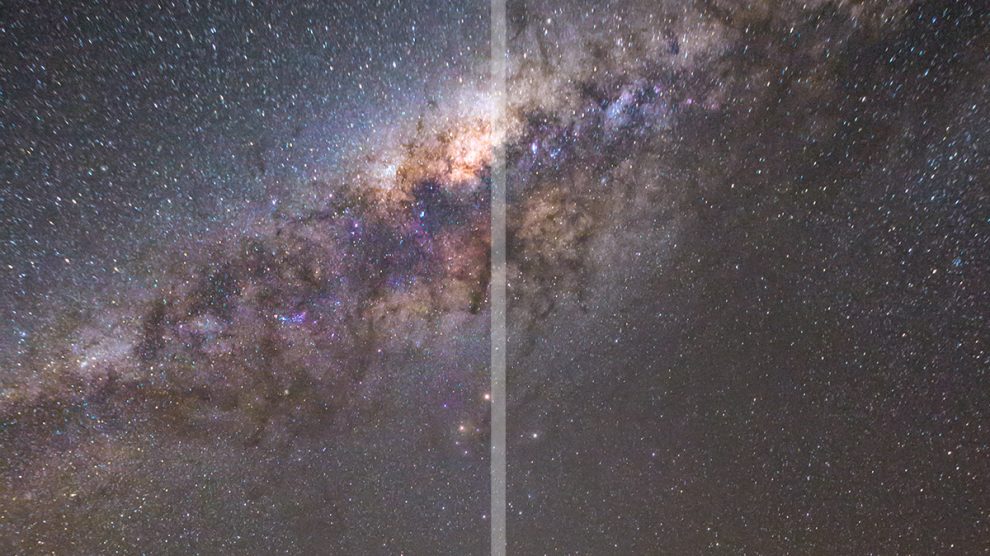 Learn how to add localized color saturation to your Milky Way photos, only where you want it!

Something I’ve often had trouble with in the past was getting a really solid pop of color out of the Milky Way without making the dimmer sections of an image (like the foreground) look completely unnatural. Enter adjustment layer masks with Photoshop as one of the ways to make this problem go away! Think of it as “selective editing,” and it’s really easy to do once you know how.  So here you go, I’ll show you one of the ways I add color to only the Milky Way in my images with Photoshop.

Note: There are many ways to do this with Photoshop, and even better ways to do more adjustments with the same mask. However, for simplicity and learning sake, I am focusing on a single adjustment mask only for this tutorial.

Open the image in Photoshop and edit like you normally would, as adding this final saturation boost to the Milky Way should be one of the final steps of your edit. For an example, we’ll use my image of the Milky Way over Deadvlei, where I did a bunch of secret edits, and the Milky Way is ready for some more color to finish it off.

I’ll tell you about those secret edits later! Hint: they include these. 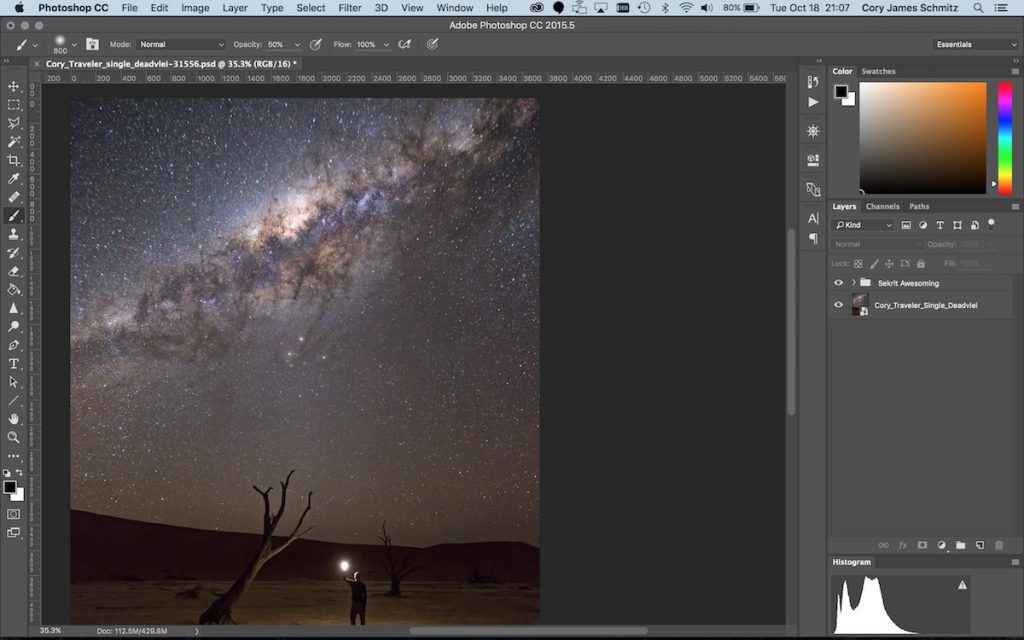 Adjustment layers in Photoshop are really cool. They allow you edit an image non-destructively, so you can turn them off and on without directly messing with the layers below them. For the purpose of this tutorial, they are very useful!

So, to create a new one for saturation, click Layer->New Adjustment Layer->Hue/Saturation. 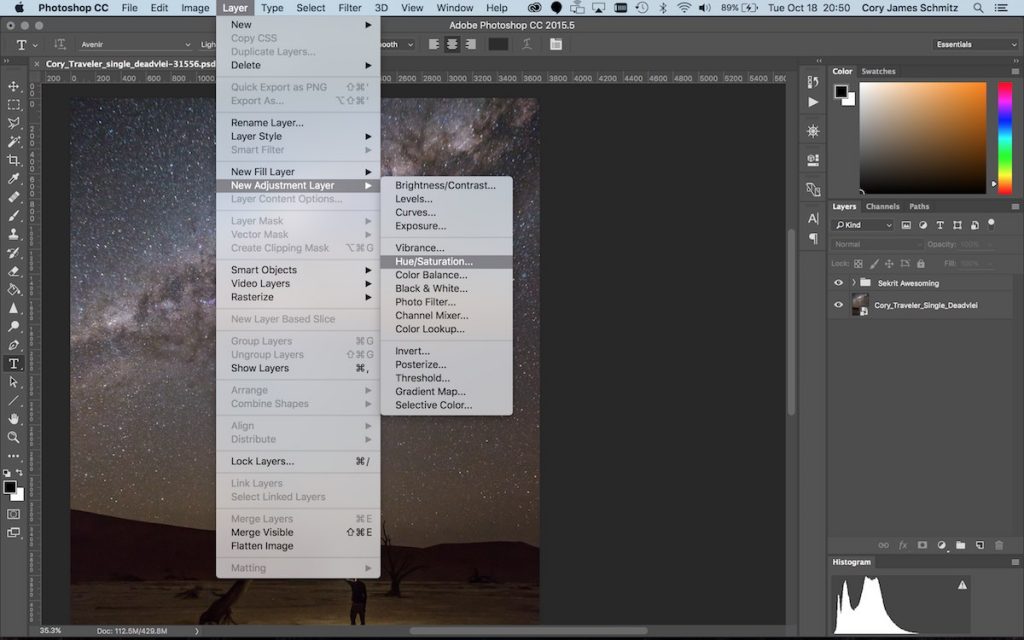 After you do this, a window may open (below), and here we can name our layer appropriately, like “Milky Way Saturation.” Leave everything else defaulted, as shown. 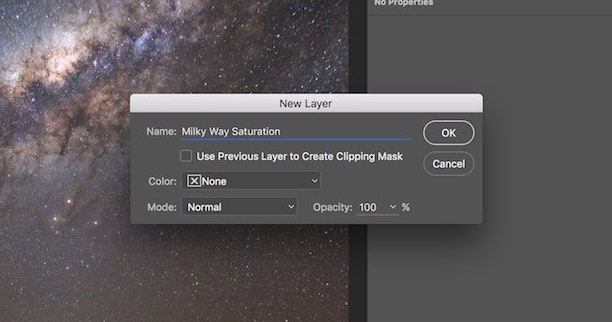 Your new adjustment layer should now show in your layers panel, like so (below). If it’s not already, make sure it is on the top of the stack of layers! 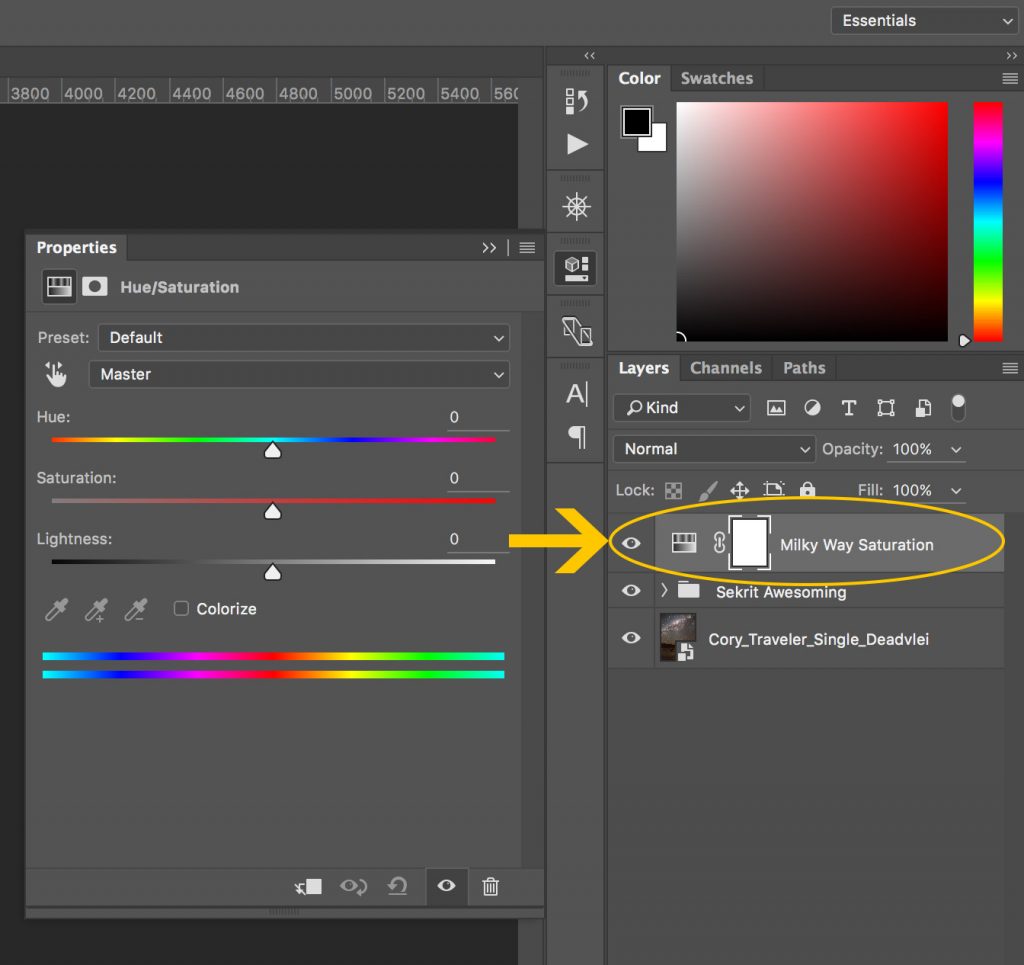 3. Boost the saturation of the adjustment layer

Double click the small dialog icon on the left side of the adjustment layer in the list to open the Hue/Saturation properties dialog window, then boost the saturation. In this case, I boosted the saturation to +40 because that’s the amount of color I thought looked best for the milky way in this image. Don’t worry about the rest of the photo, ONLY pay attention to the Milky Way at this point. 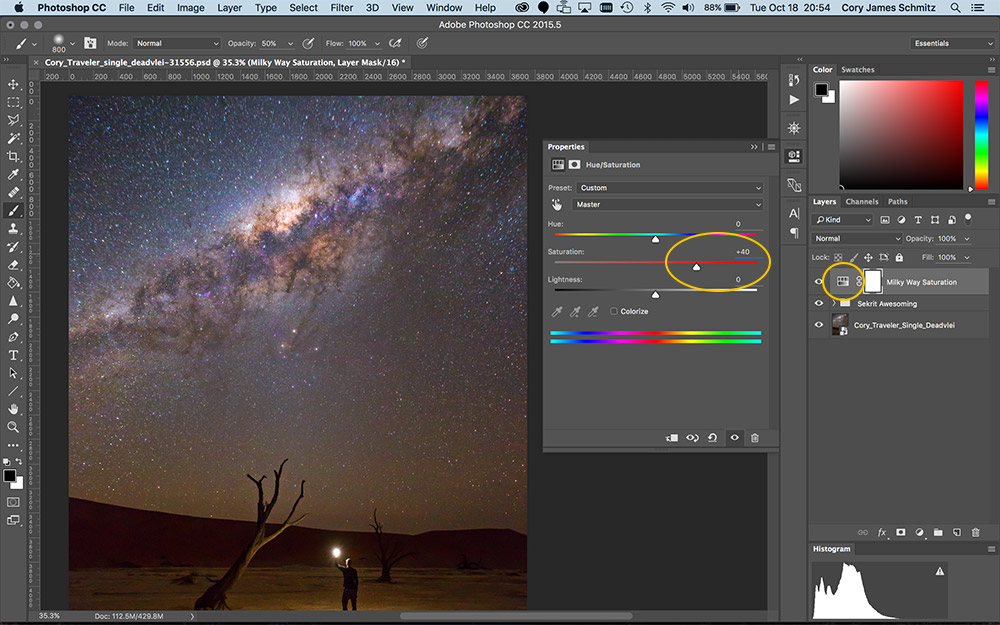 First off, we need to invert the layer mask that is automatically part of the Hue/Saturation adjustment layer, by changing it to all black. When we do this, the saturation changes we did above will disappear, but don’t worry, we will get it back, but just where we want it. They disappear because when using layer masks, anything that is white will be affected in the image, and anything that is black will not.

First, select the layer mask by clicking on the white layer mask rectangle on the Milky Way Saturation layer we created. 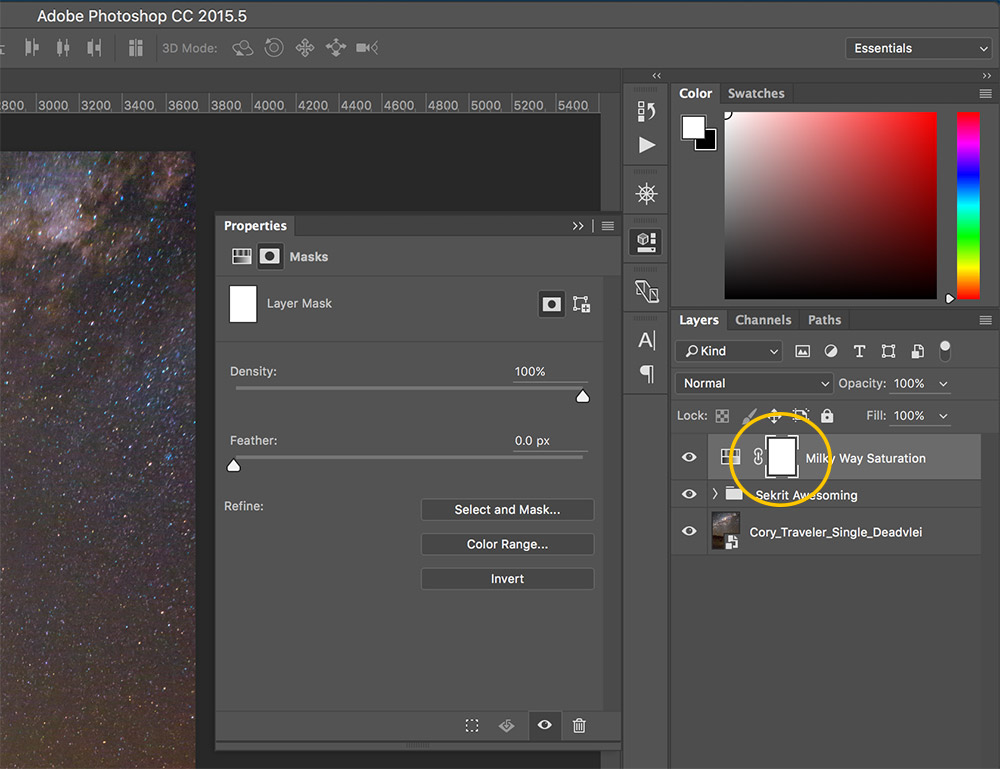 Then, in the Properties dialog for the adjustment layer, click the Invert button. This will change the layer mask to all black, negating its effect. 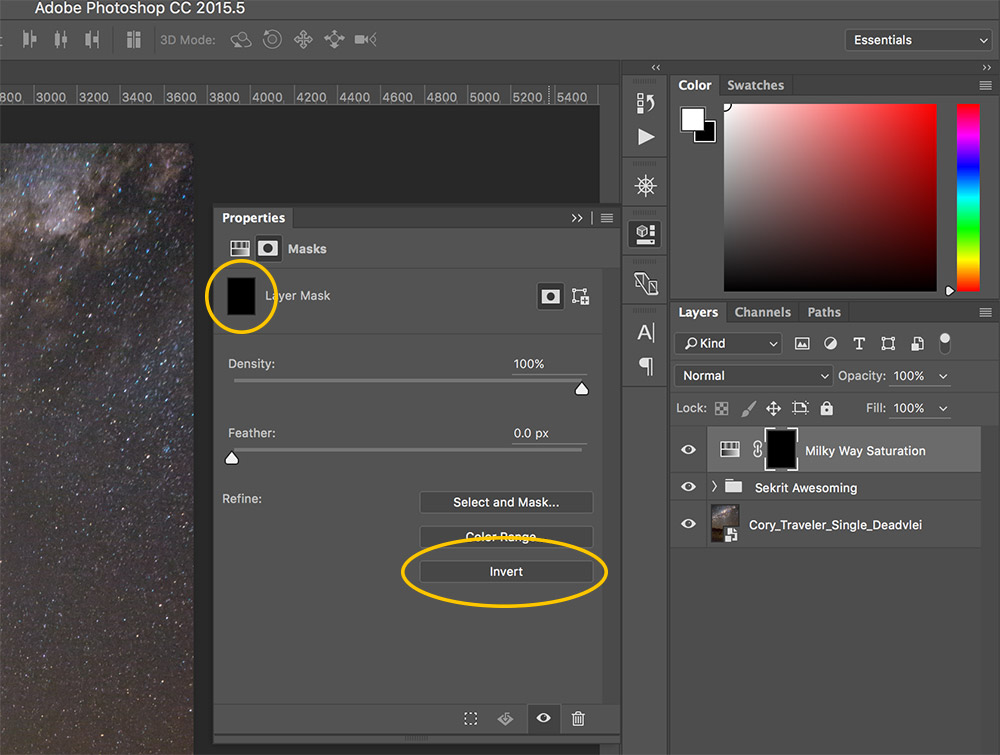 The next step is to paint white on the adjustment layer’s mask, but only where we want it to have the saturation effect. In this case, on the core of the Milky Way.

First, select the brush tool, and set it to a large and highly feathered option with the hardness at 0%, and 100% opacity. 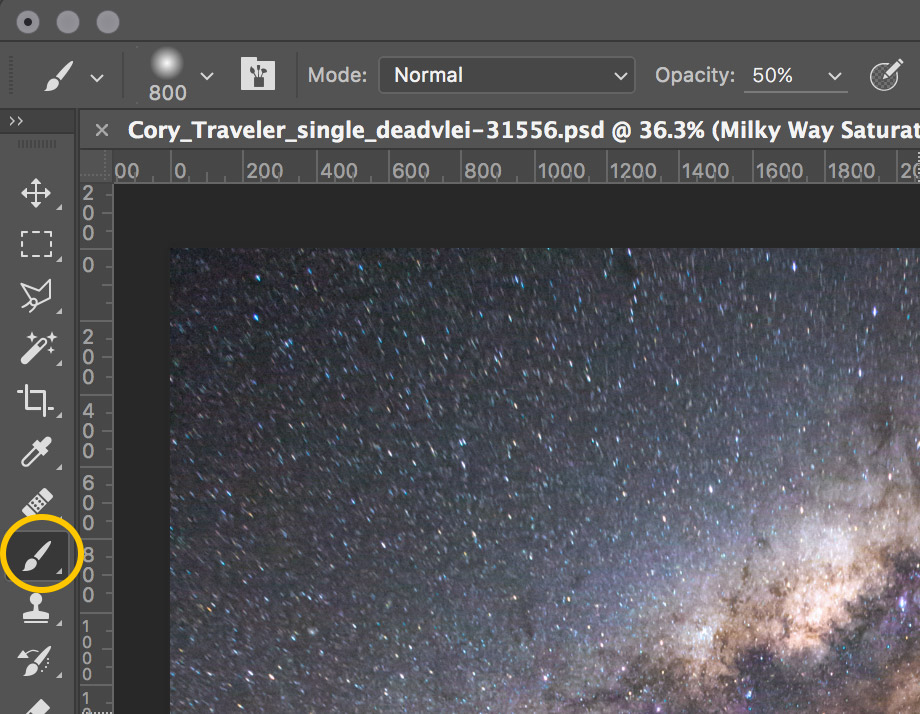 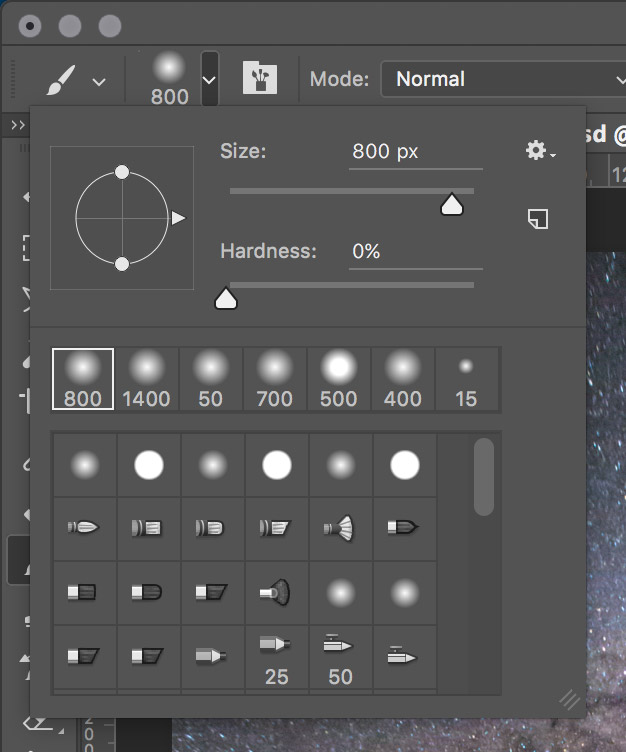 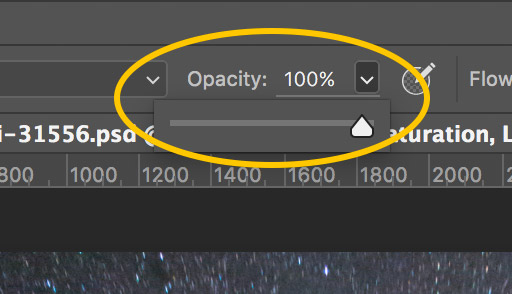 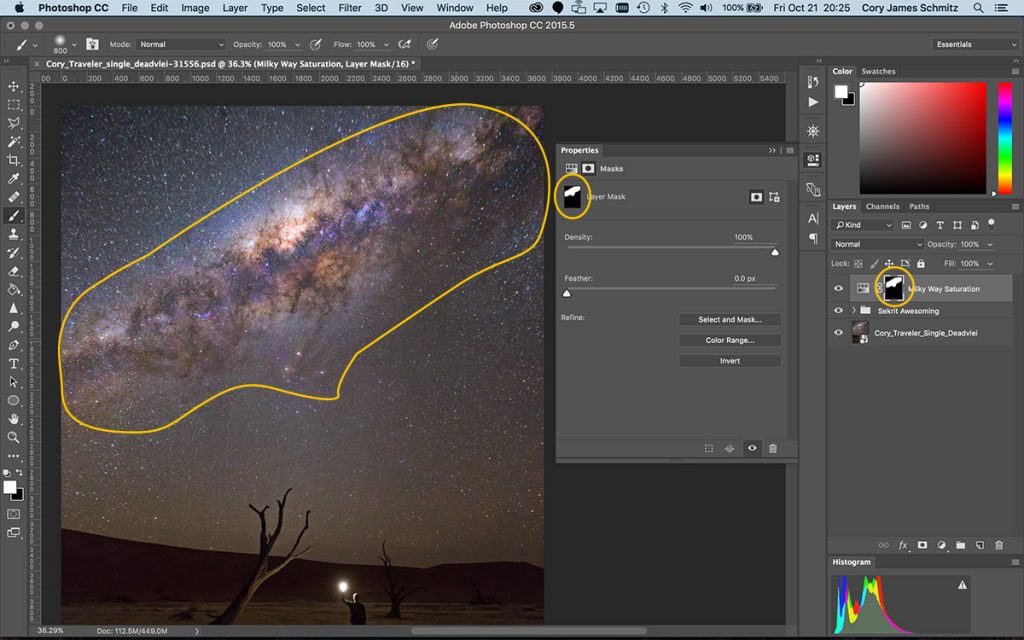 6. Fade the edges of the white parts of the adjustment layer mask

To finish out the effect, it’s often best to fade the edges of the white painted area on the layer mask, so the saturation effect is faded in and not harsh on it’s edges. 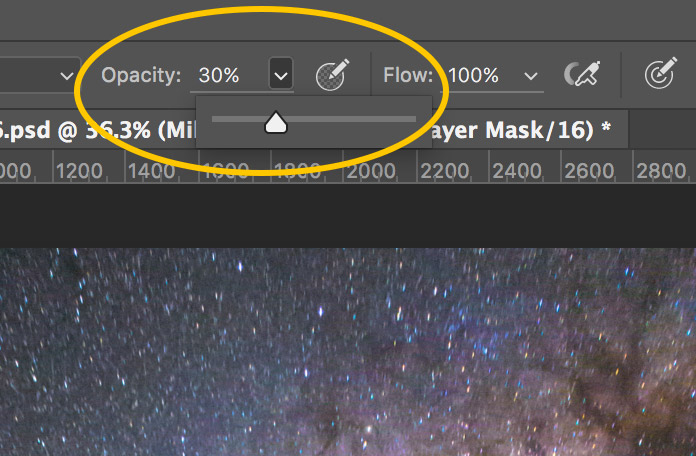 Then, paint a little more white around the edges from where you previously painted on the layer mask (make sure you still have the layer mask selected!) to fade the effect in. In this case, the area I’ve faded with this technique is bounded by yellow on the image again. Note, you can also paint with black to reduce the size of the affected area, as needed.

Lastly, adjust the saturation boost level to a point where you’re happy and Viola!, you win and you’re done! Beer time. Cheers!

Have any issues with this technique?
Let me know in the comments below, and hopefully I’ll see it and answer before one of the other readers does!

Behind the Image: Metropolitan Milky Way